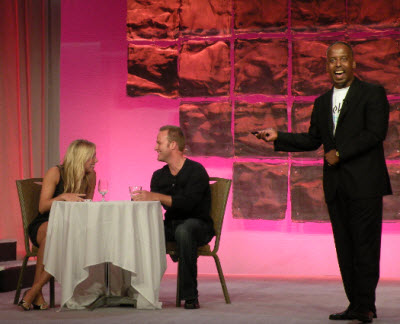 It was spooky enough a year ago when Intelius launched iSearch, a comprehensive service that combines public databases to deliver a complete dossier on individuals you are seeking.

Now this is downright scary. Or maybe it’s just useful, depending on your point of view. The Bellevue, Wash.-based Intelius has returned to DEMOfall 09 this year with a service that lets you quickly identify what you need to know about a person via a mobile phone. The company has now developed DateCheck, a free mobile app that deciphers whether the person you’re having a drink with is a stand-up person or an ex-con.

John Arnold, executive vice president at Intelius (pictured, far right), got a lot of laughs when it talked about features such as the “sleaze detector,” which tells you about the criminal record of your date. Does the date have drug-related offenses on his or her record? Is he or she a sexual predator?

You enter the name, phone number, or email address and DateCheck delivers an instant report, compiled from publicly available records. Features include  “compatibility,” which focuses on the person’s astrological compatibility with you; “net worth,” including the size of the person’s home and how many bedrooms it has; “interests,” and “living situation,” like whether or not the person already has a spouse or is living with his or her parents.

You can tell if someone lied about their real name or age, or if they have a DUI on their record. If you want more than summary information, you have to pay to get a specific report. That’s where Intelius makes its money. Arnold said that lots of people wind up paying for the more targeted reports, based on Intelius’ prior search products.

I’ve asked around about this app, which got a roar of applause after the presentation. Some people think it’s useful in the name of dating safety, while others feel like it erodes privacy. Clearly, the company will likely get a lot of attention and interest for this. After all, its motto is, “Download DateCheck: Look up before you hook up.”

The company was founded in 2003 as a broker of information technology. It used revenues from its paid search businesses to drive the development of the iSearch engine a year ago and is now expanding into the wider consumer market with DateCheck. Arnold said that more features are in the works, such as geotagging of people you know and where you met them.http://c.brightcove.com/services/viewer/federated_f8/980795693