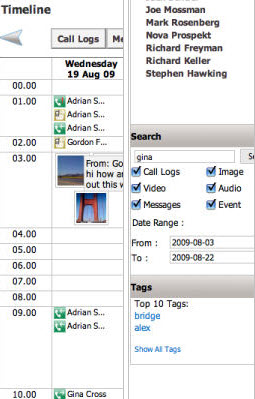 Some people really want to know what they did in every waking moment, presumably to examine their past activities in full narcissistic glory. For those people, there is Rseven, a startup service being unveiled at this week’s Demofall09 conference. Rseven backs up everything on your mobile phone to a secure site so that you can restore it if necessary.

But it also offers “lifecaching.” That is, it lets you view a chronology of your phone calls and where you made them, so that you can inspect them later as needed. It does the same for your text messages, emails, photos, and videos. Each activity is geo-tagged with the location technology in the phone so that you can plot your movements.

Here’s where it gets even more interesting: It lets you record your incoming and outgoing calls to a voice mail service. You can back up the recording to Rseven’s servers. I’d have to brush up on my legal knowledge but I believe this is illegal in some states if the other party on the phone call doesn’t know you’re recording it. I’ll await clarification on this from Rseven. On stage, the company showed how this part of the service worked, but it didn’t explain the legal issue. The presenter, chief executive Hisyam Halim, made a call to a friend. He then played back the contents of the call, and it recorded it all perfectly with decent sound quality.

[Update: I caught up with Halim at his booth at DEMO and he noted that federal law says that recording a phone call is permissible if one party consents to the recording. But 12 states, including California, require the consent of both parties. There are a couple of ways to handle that. You can ask the parties if they consent to the call, or you can insert an audible beep into the conversation that tell the party that the call is being recorded. Halim said that Rseven chose to insert beeps into the recorded calls every 15 seconds. There is also an option on every call where you decide whether to record the call or not.

Would Rseven’s records be great evidence in court and be subject to a law enforcement subpoena? Halim said that his company doesn’t know who its customers are, since you are not required to give a name when you register and the service does not ask for your phone number. 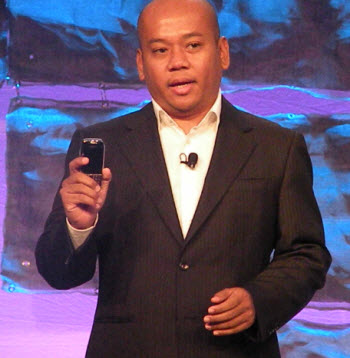 Halim says the service makes sense because the mobile phone has become a very personal device and is almost always with you. It knows the calls we make as well as those we receive. It’s the closest thing to a personal recorder of our daily activities.

“Unless you put a webcam on your head, the phone is the best personal recorder,” he said.

You can also update your contact information for a person in your address book, classifying the relationship as business or personal. Dublin, Calif.-based Rseven will update all of the contact information on multiple cell phones. Later, when you click on that person in the contact list, you can see all of your communications with that person — even the contents of SMS messages and the aforementioned recorded phone calls.

Rseven is available on Windows Mobile phones and on Nokia and Samsung Series 60 Symbian phones. People who want complete privacy from law enforcement or prying spouses should probably not use these services. Halim said the company is raising money. At some point, it will add the iPhone and Google Android platforms.