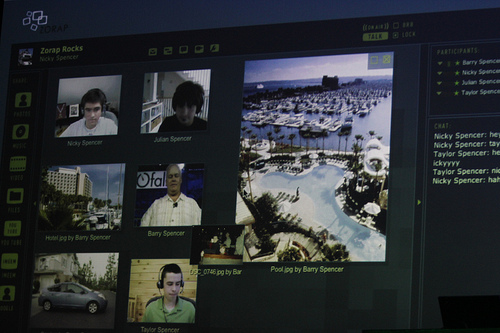 Zorap delivers the next-generation consumer chat service, a video-chat “hang out” for friends and co-workers.

The system, unveiled at DEMOfall 09, is designed to deliver quality video and audio in lower-bandwidth environments that encourages long sessions times without penalizing users for doing so. You can create a room, invite friends, and play any sort of audio or visual media in the environment while you engage in live chat.

There’s lots of rivals, from Facebook to MySpace. But Zorap hopes it can bypass them with better video chat technology. Partners include iMeem, YouTube and others that will be announced in the future. Zorap can stream context-related ads — for ticket sales, music, or ringtones — into its rooms.

This company was hard to understand on paper. But it was funny when the demonstrator and chief executive, Barry Spencer, brought up three young guys on screen into a live video chat. He shared pictures of his hotel swimming pool with them and they were impressed. He showed how he could drag in video and an entire slide show in the shared room, using simple drag-and-drop mouse clicks. The demo was good, said judge Larry Augustin, because it entertained the crowd and clearly showed that a particular kind of audience would really like something like Zorap.

The company raised raised money from private investors and is based in Falmouth, Maine.