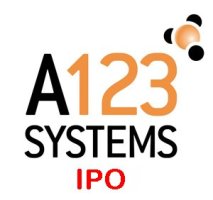 A123Systems is the name on everyone’s lips today as the most gabbed-about IPO of the week — maybe even of the last few months — preps to go live on the Nasdaq tomorrow morning as AONE. The Watertown, Mass., company made news yesterday, hiking its share prices. And today, industry analysts are stepping back, looking at what the sale might mean for other advanced energy storage companies hoping to follow suit.

A123 is of particular interest due to its wobbly financial history — not only is it perennially in the red, it’s also seen some steep losses. In the first half of this year, it reported losses of $40.7 million. It claims to have doubled its revenue since then, but that’s still not an inspiring sum. If it generates the anticipated $247.7 million in tomorrow’s sale (of 25.7 million shares), that would certainly help it pay for its capital intensive manufacturing projects.

For the most part, it’s been propped up by related industries intent on seeing it succeed (not to mention the generosity of the Department of Energy). Electric vehicles are a prime example — A123 has scored major contracts to supply Chrysler, BMW and General Motors with battery packs for their plug-in hybrid-electric models. Renewable energy companies as well, whether they be wind or solar, are equally dependent on energy storage solutions to iron out intermittent power delivery. Batteries may also be the lynch pin in renewable energy’s transition to the cleaner, more efficient Smart Grid.

But is all of that enough to merit AONE’s new, higher share price if it can’t bring in the bucks on its own? Yesterday, it bumped from $9 to $9.50 a share to $10 to $11.50 a share. Its market cap could be as high as $879 million, reports Reuters. But no one will know until tomorrow. There is some chance the IPO could flop, casting a shadow over not only battery companies, but all cleantech companies making a run at a public offering — after all, there have been no others this year, some analysts say.

Reuters calls attention to the other cleantech companies waiting in the wings for their chance at an IPO. Incidentally, none of them are battery or energy storage companies, so it’s unlikely that A123’s performance will have any bearing on how they make out. The most likely candidates are solar panel provider Solyndra (which just received a $535 million windfall from the Department of Energy), smart metering and network company Silver Spring Networks (whose CEO has pegged 2010 for a possible IPO), and electric vehicle maker Tesla Motors (a long-shot for a near-term offering, but certainly a player to watch). Of that list, Tesla is the only one who might be buoyed or tamped down by the A123 sale, considering the connection between EVs and batteries.

Of course, A123’s IPO could also be a blockbuster success — which could actually infuse the cleantech sector. The market already thinks green companies are chic, and a win would make them that much more desirable.

As for A123 itself, even if it does have a very good Thursday, it still has some major challenges ahead of it. Hanging in the red may have been acceptable as a scrappy startup, and even as a late-stage company with good intentions and happy clients. But it won’t fly on the public market for long.