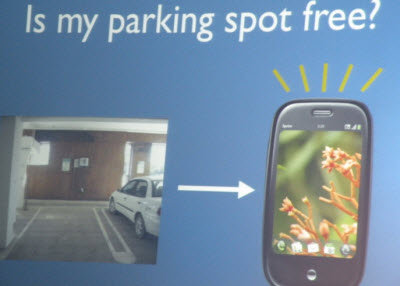 Numenta is the new(er) company from the co-founders of Palm Technologies. Since launching four years ago, the company has been building a platform around a new model of processing data, starting with video. Specifically, it demonstrated technology that can “learn” to distinguish between different types of visual data.

While on stage, Numenta created an application that could distinguish between photos of conference executive producer Chris Shipley and co-executive producer Matt Marshall (my boss). When Numenta fed a photo into the application, it knew that the photo was of Matt, not Chris. Numenta wants other companies to build applications using this technology — for example, you could build notifications around the data, so you get an alert on your phone when, say, your parking space is free.

Vitamin D (whose founders also worked at Palm) is one of the first companies building applications using Numenta technology. Chief Productive Officer Rob Haitani said we’re currently living in “the dark ages of computer video,” because computers can’t figure out anything about videos on their own — they’re reliant on human-written tags and other data.

Vitamin D is targeting the security video market, helping businesses find the relevant clips in hours or days of video footage. For starters, the company can isolate all the footage that includes people. You can also filter footage further. In the on-stage demo, Haitani took hours of footage, then told the application that he only wanted to see clips where someone had been loitering near the mailbox, i.e., whenever a person was standing in a certain area of the footage for longer than a certain period of time.

Vitamin D just started signing up users for the beta test at its website. You can also watch a video demo.