The cost of providing storage in the data center cloud isn’t as cheap as you might think. That’s why it can cost a small business $500 a month to backup its computers.

Why is that cost so high for storing a terabyte of data, when a terabyte hard drive costs no more than $100? Symform, unveiling at this week’s DEMOfall 09 conference, has figured out how to keep the costs of cloud-based storage low — as much as ten times less than the current costs. It offers small businesses storage in the cloud. In return, each computer user who uses cloud storage has to give Symform some space on their hard drives. If you use a gigabyte of storage in the cloud, you give up a gigabyte of storage on your hard disk. 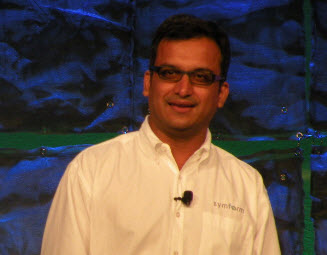 Seattle-based Symform makes very good use of that space. It takes your files, encrypts the data, and then splits each file up into 96 different parts that are distributed to the hard disks of other users. When it comes time to restore those backup files on someone’s computer, Symform will reassemble all of the pieces quickly. The risks of losing a file are minimal since the file is backed up on so many other users’ machines, said Bassam Tabbara, chief technology officer of Symform. The key isnight is that the Internet is already decentralized, has lots of idle storage, and the real estate for the computers is already paid for — by you.

The Symform Cooperative Storage Cloud is a good deal because you can access your data in the cloud simply by logging in to a web site, allowing you to get your files anytime, anywhere. You can also access the data in case your computer is stolen or damaged. Besides Mozy, other rivals include Carbonite and Data Vault. Market researcher IDC estimates the storage-as-a-service market could hit $3 billion by 2012. Symform chief executive Praerit Garg said on stage that studies show that 70 percent of small businesses shut down within a year of a disastrous loss of data. But only 60 percent of small businesses do online backup because of the costs.

OVP invested $1.5 million in Symform in May. Symform was founded in 2007 by veteran Microsoft engineers Tabarra and Praerit Garg (pictured). They started the company because they felt the economics of data centers and cloud computing were out of whack. The company has eight employees.