This is a bit of a review I had written beforehand that I added some verbal polish to, and it’s basically a slander-fest review of an old-ish next-gen game. It’s called Conflict: Denied Ops, for PS3 and Xbox 360. Unfortunately, it exists.

I’m following and experimenting with some grading systems, so bare with me.

Conflict: Denied Ops is a first-person-shooter that is said to focus on high-adrenaline action and strategic co-operative tactics. Conflict has had previous installments on the original Xbox and PS2, and to my memory, all of them sucked. They’ve been known for piss-poor AI and low-end graphics. Will Denied Ops fix some of the series’ issues, or has it picked up some new gripes along the way? 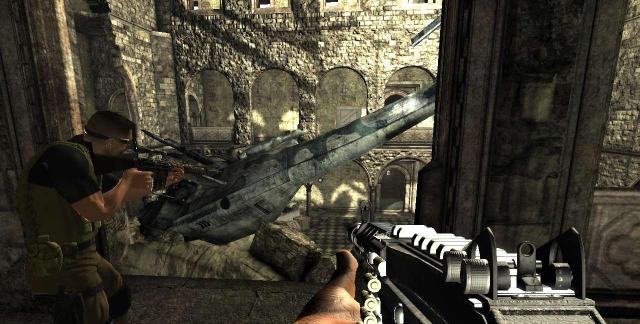 First, let’s talk about the graphics. From the original game trailers, the graphics seem pretty average. Well, you’re totally wrong. They’re much worse than that. It would never look as good as the advertisements had the graphics. It made me wanna gouge my eyes out, because it was so bad looking. I mean- come on, it’s a next-gen game for PS3 and Xbox 360, I swear it looked like a PS2 launch-title! Chunky looking, overall, some characters and animation look ok, but really, it’s unacceptable in this console age.

Well, because the graphics suck, Denied Ops is set off on the wrong foot in this review. Can the gameplay save it? No, it’s pretty bad, too. It may even be worse than the Graphics. The physics to start with, make no sense at all. Exploding barrels (oh noes, insert Cliche!) fly up in the air and land on the floor before exploding. It’s like I stuck a trampoline under it, launched it up, then shot it.

Then comes overall gameplay. I expected a jump button in this game like typical shooters, but no, this is worse than a generic FPS. The action button is your “does-everything” button. When you see a ledge that is usually taller than you, you don’t tap a jump button, but instead press the action button to climb it, triggering a really slow animation of climbing it (in first person) and that can get reall frustrating in an intense firefight…and by intense, I’m talking a whole different intense.

All the weapons are so pitifully weak that it’s better to just melee with them then to use it. Wait- what? Bullets are inferior to slowly doing a crappy motion that is considered hitting someone? You’ll be shot at- a lot. However, there’s almost no chance of dying unless you walk up to a large group of enemies and try to catch the bullets with your face.

The enemy AI is absolutely retarded, too. They don’t all shoot at once, Once they shoot, the enemies reload and sometimes turn their back against you…when you melee them, they finally turn around…they don’t hit you back, like usual shooters, but instead try to shoot, but miss at point blank.

I tried to kill myself to stop myself from playing, but I only died by firing at a barrel next to me, only to find that my teammate is nice enough to bring me back to life, thus further proving that it’s impossible to actually die in this game. I could have easily just quit the game, but that would be a waste of my money and a waste of time trying reviewing this. 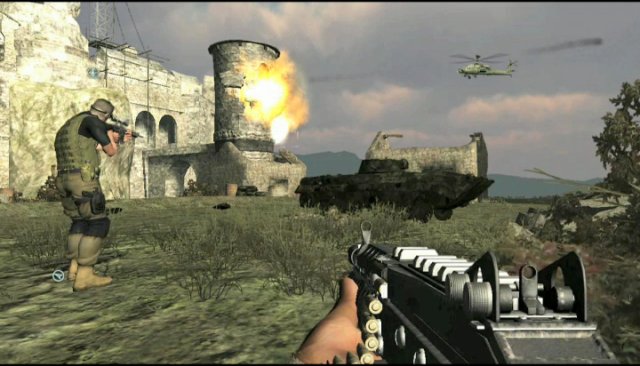 I guess you’re already entertained at my pain. The weapons are even more atrocious than you would think. Aside from the horrible power of them, they also have alternate fires. That’s where the dreadful weapon switch system comes in. Tapping it does a quick switch, but only switches fire types, not weapons. So to switch weapons, you have to hold down the weapon switch button and tap the d-pad to find your weapon.

Can you say “Carpal Tunnel”? There was one instance where I needed a rocket launcher to stop a tank, and I took forever to whip it out. So after surviving several tank rounds, I destroyed it with my rockets.

There’s also a somewhat competent AI partner (or controlled by people in Co-op), who has different abilities than you which help in objective situations. You can switch between your two characters on the fly, but it’s still not a fun game.

Okay, out with the gameplay. Now for the story. All I can say is that it’s about bad guys in Venezuela, and you have to stop them. Yeah.

Now that we got the story covered, let’s talk about the sounds. It’s easily the best part of the game. The gun sounds reek of generic-ness, and the voice acting has stereo-typical written all over it. The enemies sound like middle aged white guys trying to impersonate stereotypical Mexican people. Last time I checked, Mexico isn’t Venezuela.

Overall, it’s a terrible game. Along with the bad quality of the core game, it’s also littered with glitches and framerate dips. Oh yeah, and the multiplayer lobbies are empty, because no one plays. So it’s not even worth buying for a multiplayer experience. Don’t buy Conflict: Denied Ops. Stay away from it. Maybe the developers will learn from poor sales and reviews that they shouldn’t make another one in the series. Don’t even rent it, or download the demo available on Xbox Live, PlayStation Network and on PC Download sites. It’s not worth your time.

Graphics: 3/10
The terribly choppy PS2 graphics, it makes me want to gouge my eyes out.

Sounds: -9/10
From terrible voice-acting to laughably bad gun sounds and explosions, the only thing stopping it from being the complete opposite of perfect, is that it has a slightly bareable soundtrack.

Presentation: 0/10
Some scenes are memorable on a borderline epic scale. Yeah, too bad the enemies look as ugly as sin and you can’t die. Takes the fun right out of that.