Editor’s note: Isaiah raises some hell over EA’s marketing campaign for Dante’s Inferno, but since I haven’t been offended yet, I can’t say that I agree with all his points. The “acts of lust” stuff was worded really poorly, sure, but I imagine that I if were a marketer, I wouldn’t be able to resist tapping into the Deadly Sins for original ideas, too.

And I think the press-bribing bit is actually pretty brilliant. Hey, if the journalist wanted to cash it in…well, it’s pretty clear to all involved what the moral consequences are. It’s so perfect! -Shoe

I’m writing this assuming that Dante’s Inferno is the perfect game. Why? With the marketing and promotional ills this title has suffered, one can only hope that it is absolutely immaculate.

Let this be known: I am all for thinking outside of the box and making your product stand out (especially since there seems to be quite a few comparisons to a certain game associated with gods with possible war in it). Dante’s Inferno has managed to stage a fake Christian protest at a major trade show, play the role of pimp by raffling off a date with a booth babe, and most recently EA sent very real checks to well-known (and maybe not so well-known) gaming journalists. 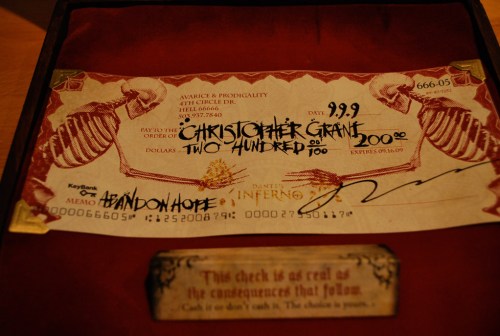 It is already hard enough to promote games as art. But this is very much a business as well. Writers and enthusiasts understand that if Dante’s Inferno is ultimately the perfect game (which I hope it is), it should be marketed to the best of Electronic Arts ability. But…remember when EA was stressing experimentation and quality instead of quantity? Mirror’s Edge was not promoted with such crassness. I do not remember journalists complaining about their dates with Dead Space booth babes.

Wait. Dead Space and Mirror’s Edge may not have made enough money, which is probably why EA is reaching into the gutter for promotional ideas.

It should be stressed, this is constructive criticism and hopefully a reminder to those who are going into promotional advertising for a big company: DON’T DO THIS. Thanks to the fake protest staged at one of this year’s largest gaming conferences, Dante’s Inferno has a stench about it which could be hard to shake off.

Instead of listening to the feedback from anyone after that trade show, Electronic Arts decided to kick it up a notch and attach a fake website supporting the fake protest. EA spokeswoman Holly Rockwood told the Associated Press that EA hired a viral marketing agency. Holly, choose more wisely next time.

For the record, EA has since apologized for their “Sin to Win” folly. Electronic Arts and developer Visceral Games held this contest at San Diego Comic Con this year, where an attendee was encouraged to “commit acts of lust” and then post it on Facebook. EA later explained that these “acts of lust” were simply taking photographs of their costumed representatives and posting them on their company Facebook page. Phew! You know, for a second there I thought they were encouraging rape and misogyny, but when they explained it all corporate-like…that really cleared things up.

I can see the flames building, so I’ll say this: With all the good that Dante’s Inferno had (and possibly still has) going for it — namely having the same development team who also worked on Dead Space — EA is still in a position to support this game through and through. This is their baby, and they don’t want anyone talking bad about it, understandibly so. With all the negative press Dante’s Inferno has garnered, it really is a shame that the publisher has to issue statements and double-talk, because an ill-advised marketing campaign is making a potential quality title look less than. 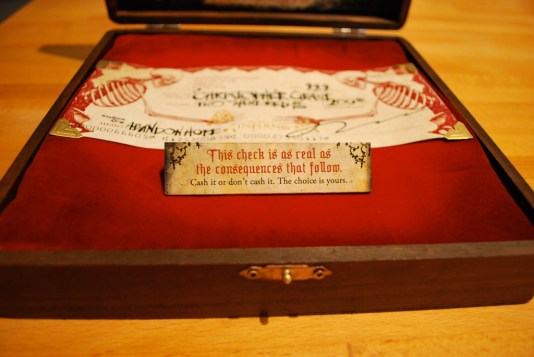 Lastly, if it is any consolation, it does appear that the most recent ring of hell the Dante’s Inferno team is promoting (Greed) is one that does not offend the religious or women. It just offends game journalist and the games industry as a whole (if you are a female and/or a religious games journalist, however, then Dante’s Inferno is definitely not going to be in your good graces soon). Sending a check to games journalists at major publications with the tag line “If you spend it you are greedy. If you don’t you’re wasteful” is quite hilarious and sad. Couldn’t we just send the check back?

I wonder if some blogs and publications are still holding on to their Satan checks? We have seen silly marketing ideas since the very early days of gaming. We will continue to see them well after the release of Dante’s Inferno. I decided to write about these issues because I was one of the apparent eight people excited for the game. I really like supporting mature games, but when they are promoted in such an immature fashion it really is quite telling about the progress that needs to be made in the games industry.

Sidenote: I really do hope Dante’s Inferno is able to throw the Hail Mary pass (no pun intended) and rebound from this bad press. It really should be about the game and not about the hype (or lack there of) surrounding it.

This article comes complements of the Brog & TSS