It’s official: cleantech is the darling of the rebounding investment market. Not only has the sector maintained the momentum it picked up in the second fiscal quarter of this year, it has emerged as the No. 1 sector in U.S. venture investing overall, surpassing long-time leaders IT and biotechnology, according to a new report released today by the Cleantech Group and Deloitte & Touche.

Other than this revelation (and it’s a big one), the data highlights roughly the same three takeways as Greentech Media’s preliminary Q3 roundup released earlier this week: 1) Cleantech’s star is on the rise, with $1.59 billion invested in 134 companies in the third quarter; 2) Government support in the form of grants and loan guarantees has reduced some of the risk involved in green investing at all stages, encouraging freer flow of capital; and 3) Battery maker A123Systems‘ blockbuster IPO last week has “opened the floodgates” for more lucrative public exits in the cleantech sector — even in the next two quarters. As the overall exit market thaws, the banner IPOs coming down the pipe will be disproportionately green, says Scott Smith, partner at Deloitte and co-author of the report. 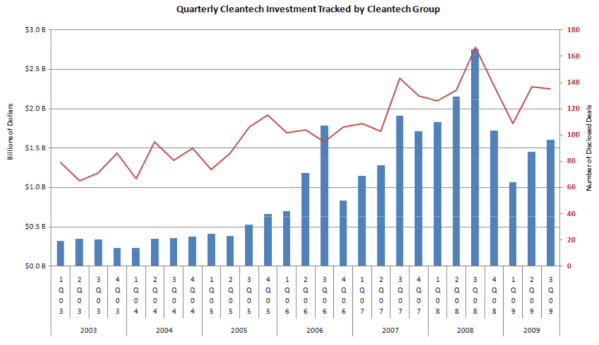 Taking a closer look at the broad impact of federal and state stimulus dollars on the business, the Cleantech report pointed out that all of the third quarter’s major deals (including the IPO) involved companies that had benefited from massive government support:

There is a clear and direct correlation here — investors are emboldened by the knowledge that government has cleantech’s back. Some reports have suggested that the government’s role has temporarily displaced private investment in later-stage cleantech companies. Just yesterday, VentureBeat reported that CMEA Capital canceled plans for a $500 million late-stage cleantech fund. Jim Watson, managing general partner at the firm, implied that government funds had made venture funding less necessary (it bailed on the fund after spotting too few opportunities in the late-stage category at the right price). But the Cleantech Group doesn’t think this will be a trend — instead, government spending will continue to motivate investment. After all, someone needs to help pay back the millions in government loans.

“We like to think of the stimulus money as the starter fluid that will help catch the coals of venture investment,” says Cleantech Group managing director Dallas Kachan. That said, the amount of VC money going to late stage companies did drop in the third quarter, with seed and early-stage startups getting the bulk of the attention.

Investors are now excited about investing in emerging companies with the potential to become the next A123Systems. As that company’s success has shown — positive balance sheets are not mandatory for big exits. The battery maker never turned a profit before going public last week — in fact it recorded losses exceeding $40 million dollars in the first half of this year. But that didn’t scare off investors, who were keeping a closer eye on the company’s revenue growth. With huge gains being made in revenue, A123 was able to hit a valuation of $1.9 billion by the time its first day of trading (Nasdaq: AONE) closed.

The Cleantech Group and Deloitte declined to discuss upcoming IPOs in the sector, though other analysts have named Solyndra, Tesla and smart metering company Silver Spring Networks as the most likely candidates. Looking at the breakdown of investment and deals in Q3, it seems like solar power might be the best bet. Drilling into the numbers (which notably don’t include separate figures on Smart Grid investing):

Greentech Media’s report, released Monday, included very similar data. But the Cleantech Group’s results diverged from it in several key areas. The former counted $300 million given to algae-based biofuel maker Synthetic Genomics by Exxon as venture capital, which the Cleantech Group did not (accounting for the difference between the $1.9 million and $1.59 million in total cleantech investing reported by the two firms, respectively). Kochan of the Cleantech Group explained that Greentech’s report misplaced several deals in or out of the venture capital category.

None of these discrepancies changes Q3’s big story: Cleantech is king, and it’s expected to keep its throne for several quarters to come.

You can view the Cleantech Group’s press release on the data here.