After social sharing site FriendFeed slows innovation as its founders ease their way into new jobs at acquirer Facebook, where will its savvy users go?

Cliqset wants to be the destination. The Jacksonville, Florida-based startup has turned itself into a site like FriendFeed where users can keep tabs on friend updates from about 70 services including Facebook, Twitter and LinkedIn. Before, Cliqset was focused on being an identity provider that let users interact with other web services. (VentureBeat readers can check out the revamped site here with special invite codes.)

The design vaguely resembles Twitter with some additional features like a stream of recently bookmarked sites. Cliqset also supports updates of a greater variety than just text — users can send photos or bookmarked URLs directly and have their followers comment, like or share them in real-time. They can also update their statuses on sites like Twitter remotely from Cliqset. The site is location sensitive so updates can be paired with their coordinates.

Co-founder Darren Bounds says while Cliqset takes some cues from FriendFeed, it has a simpler, more intuitive design.

“The future of FriendFeed is very ambiguous for a lot of people. They have a great, passionate user base. We’d love to have that passed on to us,” Bounds said. “But they do some things that are atypical for a site that streams activity, which can lend itself to confusion.”

That said, it might be difficult to gain mindshare when the sharing space has become crowded with startups like ShareGrove, Lissn and Threadsy, not to mention dominant players like Facebook, Twitter and Google. Cliqset has raised $2 million, all from a single investor named Derek Mercer, who founded Vurv Technology, a talent management startup that human resources company Taleo bought in 2008 for about $130 million. 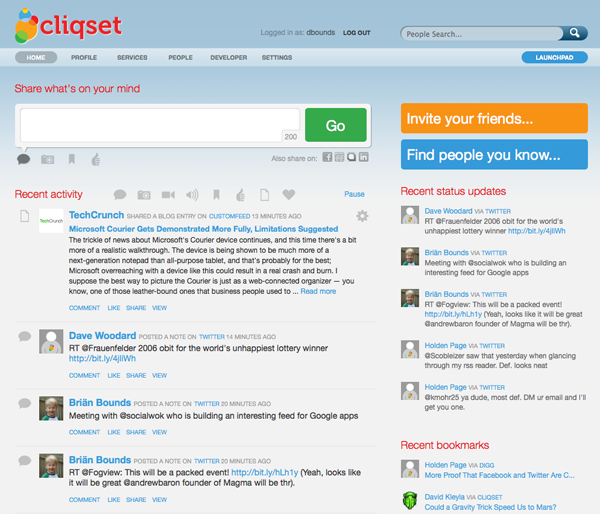