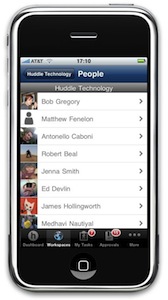 Huddle is a London startup trying to make its mark in the crowded collaboration market by offering the most comprehensive tools around — co-founder Andy McLoughlin says customers should be able find everything needed to work together at the Huddle site. Now the company is adding to those features with a web conferencing tool and is allowing users to access Huddle in more places, with an iPhone application and integration with Microsoft Office.

The web meeting feature is pretty standard — McLoughlin showed it to me earlier this week, and it should feel familiar to anyone who’s used Cisco’s WebEx or Adobe’s Acrobat Connect, with the ability to share your computer desktop, switch control of the meeting, and highlight different areas of the screen.

But this is still significant because it’s yet another task that Huddle users don’t have to do elsewhere. And the pricing reflects that. Where many companies treat web conferencing as one of their main revenue sources (in other words, they charge for it, and they often charge a lot), McLoughlin says it will be added to existing Huddle plans, even the free plan, without any extra charge, though how much time customers get depends on the plan.

The iPhone app, meanwhile, lets you view documents, task lists, discussions, whiteboards, and your Huddle dashboard (where all your Huddle activities are gathered). For now, you can only look at stuff, not edit a document or comment on a discussion, but McLoughlin says the company is looking to add those capabilities, especially as it moves to other smartphone platforms like the BlackBerry.

Today’s last major addition is Office integration. Office was already a big part of Huddle, since one of Huddle’s big selling points was the ability to collaborate on and approve documents, usually those created in Office (though you could also write and collaborate online through Huddle’s integration with Zoho). But now, you don’t even have to go to Huddle. Once you’ve installed the Office plugin, you can upload, download, and approve documents directly from Office.

Even before today’s new features, Huddle had already expanded beyond the Huddle site, by launching applications on social networking sites like Facebook, LinkedIn, and Ning. It raised $4 million in funding form Eden Ventures. Huddle is also a participant in the Microsoft BizSpark program, which provides free software and support to startups.