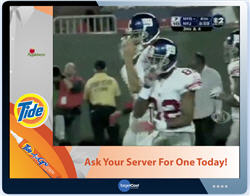 TargetCast Networks isn’t a company that gets talked about in the same breath as Twitter. TargetCast makes the technology for televisions in bars and nightclubs, the tech that puts even more ads on TV screens in Applebee’s, Chili’s and Hooters. I haven’t confirmed yet where you can see TCN in action in San Francisco, where engineers more commonly build gadgets to turn bar TV sets off.

In the past few days, though, TargetCast has announced both the acquisition of rival Ripple and a $6.5 million B round of funding, with Claremont Creek returning after lending $6.3 million in Series A two years ago.

Draper Fisher Jurvetson got in on this round, and DFJ managing director John Fisher has joined the board of directors at TargetCast.

Fisher wrote in a prepared statement: “The giant sucking sound of media dollars draining out of traditional print media and into the digital realm is proof of the attractiveness of this contemporary advertising medium.”

How many dollars, John? Trying to size the opportunity is tough for those of us who follow Twitter for a living. All the money advertisers spend through Google is less than 3% of the total amount of money spent on advertising in America. I’m wondering how big DJF thinks the part of the pie is that will be fed into TargetCast’s displays.