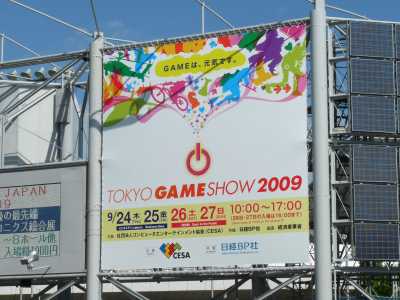 After my second consecutive sojourn to Japan to cover Tokyo Game Show, I’ve come to a few conclusions about this particular slice of Japanese gaming culture — namely, that Tokyo Game Show itself is by far the worst part of the trip. Now, don’t get me wrong — Japan is an amazing country, and if you’re patient, you’ll uncover a few gems among the megaphone-toting company shills and metal-bikini’d booth babes. But some distinctively Japanese quirks make the show incredibly difficult to cover as a journalist. To begin with…

It’s in Chiba, which is about an hour and a half away from Tokyo proper. If you’re familiar with the Bay Area, imagine something called the San Francisco Game Show…that actually takes place in Gilroy. Now, this is mostly because Tokyo’s an ancient city that lacks the space to house a convention center the size of Makuhari Messe. But that also means that, unless you’re staying in Chiba, it’s gonna be a bitch to actually get to the show each morning — the first day, I had to get up at 5:30 a.m. in order to make sure I got to the registration line in time.

In order to reach Chiba from my home base in western suburban Tokyo, I had to take a 20-minute train to Shibuya, transfer there and take a 30-minute train to gargantuan Tokyo station, where I navigated a seemingly endless parade of Jetsons-style moving sidewalks to finally take a 40-minute train to Chiba.

Of course, why not just stay in Chiba, you ask? Well, one, when you’re making last-minute plans, the nearby hotels have already filled up by then. And two, it’s cheaper to stay in the outlying suburbs of Tokyo — a helluva lot cheaper.

The Japanese want to be sure you play their game the right way. VERY SURE.

Of course, Western developers aren’t exactly innocent when it comes to controlling demos. But the Japanese take it to a whole other level, particular at Tokyo Game Show. Nowhere was this more evident than at Konami’s booth in line for the Metal Gear Solid: Peace Walker demo. As my wait came up on about an hour and I finally approached the booth kiosks, I was quite surprised to find that many were empty. Why, then, were we still forced to wait in line? Why, so that a gruff military man could ramble on for about 20 minutes on the finer points of the game’s controls. 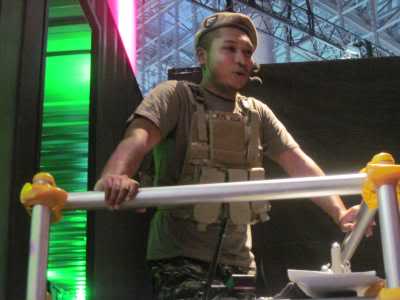 Japanese technology is amazing…except when it isn’t.

You’d think that a country as technologically advanced as Japan would be teeming with Wi-Fi spots and reliable Internet connections.

Japanese technology is sorta analogous to Japanese toilets. Either you’ll be blown away all sorts of bells and whistles and heated seats…or you’ll be staring at a literal hole in the ground, wondering how you’re going to get the job done without having to take a shower afterward. I mean, this is a country that, for reasons still unexplained to me, doesn’t appear to possess something as simple as electric dryer technology.

This weird technological dichotomy is definitely present at TGS as well. Unlike E3’s Los Angeles Convention Center, which offers a special Wi-Fi-enabled room for journalists, it’s pretty much impossible to find any sort of Internet connection on-site. As a result, you’ve gotta leave the show floor and head back to your hotel room to update. Of course, if your hotel is an hour and a half away…then you’ve got problems.

And this year, I actually had a chance to compare TGS’ media center to E3’s. Due to a registration snafu at the beginning of the show, I had to rush over to the Makuhari Messe “business center,” which consisted of a couple of circa-1997 desktops…and an Internet connection to match.