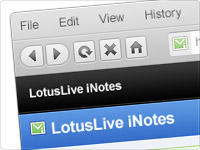 It looks IBM is challenging web-based email application like Gmail with a new product called iNotes, product of its LotusLive suite of online collaboration software.

The iNotes website describes the product as “the best of both worlds,” saying it combines the simplicity of webmail with the robustness and flexibility of desktop email programs. You can access iNotes directly in your browser, or pull the emails into other applications using POP3 and IMAP technology, and onto mobile applications using IMAP IDLE. The technology is apparently based on Outblaze, a Hong Kong email provider that IBM acquired earlier this year. iNotes also includes calendaring.

Pricing starts at $3 a month, but that’s only if you sign up for a yearlong account. You also need to pay more if you want more than 1 gigabyte of storage. (I’m already using more than 5 gigabytes in my VentureBeat email inbox, which I receive for free through Google Apps.)

GigaOm spotted the iNotes section of the LotusLive website earlier today. The service has actually been available since earlier this week, according to the LotusLive blog, but IBM hasn’t made any big announcements about it, and there’s no mention of iNotes in the news section of its site. I’ve emailed IBM, but haven’t received any details yet.

Google spokesman Andrew Kovacs tells me he doesn’t know much about the program, just what’s on the website, but he says iNotes sounds like “a great endorsement of the cloud,” i.e., applications delivered using online infrastructure. Still, he argues that IBM’s language makes it sound like this isn’t “a full cloud product.” And even though Google Apps Premier accounts cost $50 per year (compared to $36 for the basic iNotes plan), Kovacs says they include,a lot more value, starting with a 25 gigabyte inbox.