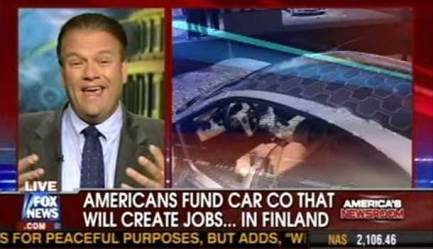 This last claim, that the DOE is supporting companies that are essentially building luxury cars, has been expressed by many critics, on the right and left. And there’s some merit to the argument. Even though Tesla claims its $465 million loan from the government will be used to build more affordable family sedans (its forthcoming Model S), those cars are still expected to cost upwards of $45,000, even after rebates. In this context “more affordable” means less expensive than its $109,000 roadster. At $89,000, Fisker’s hybrid-electric Karma is certainly beautiful, but it’s also, without question, a car for the affluent.

Still, it’s arguable that the government isn’t so much advocating the development of these cars, rather the engine and battery technologies that will eventually make electric vehicles commonplace. It’s up for debate whether the loans should have gone to companies looking to commercialize consumer-friendly models sooner. Though, General Motors, Nissan and Ford have already benefited from the DOE’s Advanced Vehicle Technology program to do just that.

What’s not debatable are Fox’s other claims. The commentators said matter-of-factly that Tesla is a British company and that Fisker is based in Finland — or at the very least conducting the bulk of their work overseas. While both companies have facilities in these countries (Tesla now has showrooms all over the world, Fisker has a Finnish assembly line), they are very clearly based in the U.S. Tesla just acquired a new headquarters and factory space in Palo Alto’s Stanford Research Park, and its CEO, confirmed Californian Elon Musk, has been very vocal about rooting its massive new Model S factory in the state. Fisker is based in Irvine, Calif. It’s unclear why Fox thought this would be a convincing argument — a simple trip to either company’s web site or SEC filings clearly proves it wrong. Toyota produces more car parts in the U.S. than any other automaker — does that make it an American company?

The Wall Street Journal did a somewhat better job insinuating nefarious ties between Fisker, the DOE and former vice president Al Gore. The story, focusing mostly on its recent loan, subtly pointed out the connection between major Silicon Valley investment firm Kleiner Perkins Caufield & Byers (one of Fisker’s early backers), where Al Gore is a partner, and the DOE’s decision to grant it funds for the development of two car models and eventual commercial roll out of thousands. What the story neglected to say is that former Secretary of State and conservative mucky-muck Colin Powell is also a major investor. It also elicited a strong backlash from readers calling the connections incidental at best, which they truly seem to be.

To debunk these claims, Fisker went as far as putting out a press release, emphasizing the company’s American origins and assuring that none of the DOE funding will go toward operations outside the country and that all of the loans will be payed back. It even seems to apologize for needing to manufacture some of its cars in Finland, explaining that no suitable and affordable plant could be found in the U.S. The DOE money, however, will be used to convert a U.S. assembly plant for production of a cheaper ($40,000) plug-in hybrid model slated to hit the road by 2012. It’s kind of a shame when one of the most innovative, energetic companies in the EV business has to cow-tow due to some talking heads’ fact-free banter.

That said, it’s not exactly surprising that the conservative media is taking aim at companies like Tesla and Fisker. Based in California, receiving millions from a Democratic government, offering products targeted at the wealthy (clearly, the scheming liberal elite) — they’re low-hanging fruit. It shouldn’t be the case, but let’s hope they prove even their misguided critics wrong by using the money wisely and hastening the development of practical, quality cars.

In the meantime, here’s the video of the Fox News broadcast: