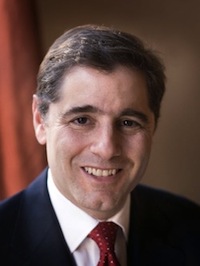 Mobile data will become increasingly important as more and more people buy smartphones with mobile Internet access, and also access those networks using laptops and netbooks, Genachowski said at the CTIA wireless conference in San Diego. At the same time, that’s naturally going to put a strain on the wireless carriers — something Genachowski may have personal experience with, since he’s an iPhone user.

“What happens when every mobile user has an iPhone, a Palm Pre, a Blackberry Tour or whatever the next device is?” he said. “What happens when we quadruple the number of subscribers with mobile broadband on their laptops or netbooks?”

You can read more details about Genachowski’s statements at the Wall Street Journal and ZDNet, but here are the big four points in his plan:

1) “Unleash” the wireless spectrum for faster 4G networks.
2) Reallocate some of the spectrum used currently for other purposes to wireless broadband.
3) Develop rules that ensure everyone’s wireless traffic is treated fairly. (Genachowski made a similar proposal recently to formalize the FCC’s rules on network neutrality.)
4) Empower the consumer, so they feel like they’re shopping for broadband in a transparent, competitive market.