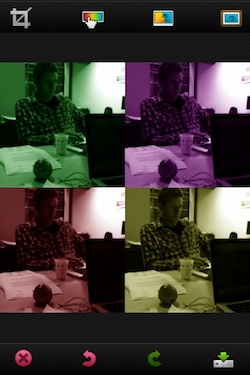 Adobe just released a free iPhone version of its popular Photoshop application, allowing you to do lightweight photo editing on your phone.

Like the free website Photoshop.com, Photoshop.com Mobile is meant for casual users, not the artists who do heavy-duty image manipulation on the desktop version of Photoshop. There’s a simple interface for doing things like cropping the photo, making it black-and-white, and adding effects like soft focus and a “sketch” mode that makes your photo look more like a drawing. (You probably don’t need much more in the way of advanced features, since there’s only so much that can be done with a blurry mobile photo.)

There are plenty of other photo manipulation apps for the iPhone, but Adobe has the advantage of the well-known Photoshop brand. Users can also upload and store photos at Photoshop.com, so the iPhone app should help promote the website, and vice versa.

Adobe previously released a similar application for Windows Mobile phones. It already made headlines once this week by bringing cool stuff to the iPhone — namely, announcing the ability for Flash web developers to convert their apps into an App Store-ready iPhone version.