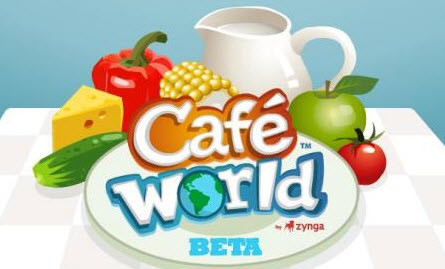 Zynga is starting to accelerate its momentum in social games on Facebook. The latest proof is Cafe World, a Facebook game that has grown to 10 million users in just one week. In fact, Cafe World has gained 1.5 million users today.

That is an astounding number of users. By comparison, the fast-growing Free Realms online game by Sony Online Entertainment has taken more than 5 months to get to nearly 5 million users. But Zynga has done this before. The San Francisco company’s FarmVille game has 56 million users, according to tracking firm AppData.

Cafe World has succeeded thanks to a combination of cross-promotion from other Zynga games (including FarmVille) and advertising on Facebook, according to my former colleague Eric Eldon at Inside Social Games.

The fast growth shows that social network games are red hot, especially on Facebook, which has more than 300 million users. Zynga is monetizing its users through virtual goods, where players buy virtual items for small chunks of money. And since Facebook’s users are opening up their pocketbooks far more than other buyers of virtual goods, Zynga stands to make $200 million in revenue this year, Eldon says.

The question is how long can it last. While Cafe World is not a pure clone of Playfish’s 16-million strong Restaurant City game, there are a lot of similarities. Users create restaurants and they sell virtual good. FarmVille is also considered a copy of FarmTown. But Zynga’s games can do better, even if they are derivative, because the company has such a powerful network of gamers that it can cross promote its games to. Zynga’s “playbook” is to take ideas that others have created and innovate on top of them so they can monetize and spread faster.

Restaurant City is the 11th largest app on Facebook, but it took some time to get there. Playfish’s strategy is to do a small number of original games on Facebook. While Playfish has succeeded with 56.9 million monthly active users, Zynga has more than 142 million monthly active users. Zynga has a wider variety of titles, from its poker game to a mafia game, and it has been more willing to clone the titles of other successful players. Zynga hasl also been willing to outspend its rivals on ads. All of that shows that Zynga has executed well on strategies that have been pioneered in the traditional video game industry. Thanks to its growth, Zynga may go public by March, Eldon predicts.