Venture capitalists are a breed in decline.

While venture capital firms typically raise money every three or four years, and so a single quarter represents only a snapshot, the very small number of firms raising money (historically speaking) shows just how much of a crunch the industry is in right now. 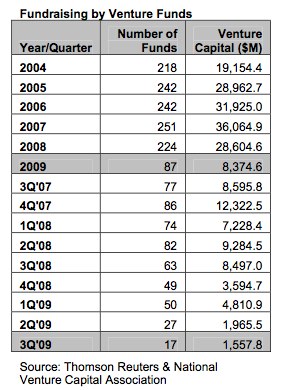 We’ve talked about the reasons before: Venture firms saw their heyday in the late 1990s when international investors rushed to give them money, lured by the impressive profits produced by the Internet boom (including the IPOs of companies from Cisco to eBay). But the surge of new VC entrants meant more competition, which lowered the overall profits, and we’re seeing the fallout now.

Only $1.6 billion was raised by the 17 firms in the third quarter, which is the lowest level of dollars committed since the first quarter of 2003 when $938 million was raised.

However, this may represent the bottom. “Anecdotally we are hearing that fundraising activity is accelerating as more firms that were waiting for economic recovery are beginning to formally seek commitments,” said Mark Heesen, president of the NVCA. “The reality, however, is that many limited partners are still determining their long term strategies in wake of the past year’s financial crisis and that slows the process down considerably. We expect commitment levels to remain modest for the remainder of 2009 with gradual increases beginning in 2010.” 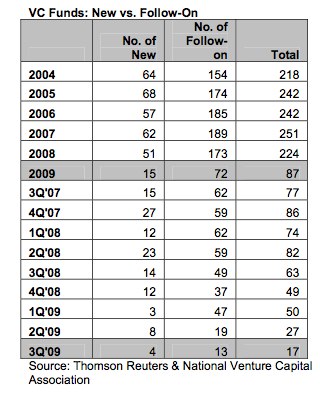