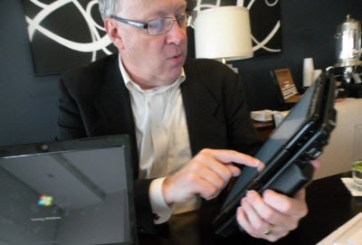 Hewlett-Packard is launching a series of new products today, including some long-awaited touchscreen laptop computers.

The highlight of today’s 10 product introductions are laptops with multi-touch touchscreens that work with Microsoft’s new Windows 7 operating system.

“We introduced our first touch screens in 1983 and now we’re on our third generation of TouchSmart models,” said John Cook, (right) vice president of desktop marketing in HP’s Personal Systems Group. “Touch may very well be the best way to interact with a computer.”

That’s a bold statement, considering touchscreens are only beginning to make their way into laptops and desktops this year. But HP worked closely with Microsoft to integrate touch technology into Windows 7, the new operating system which launches on Oct. 22. 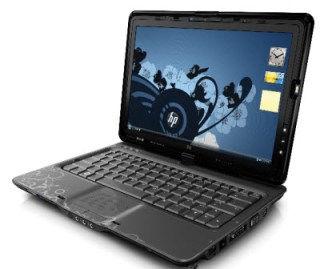 Consumers can use two fingers to navigate through touchscreen interfaces for the HP TouchSmart tx2 laptop (right), which starts at $799. The screen can rotate 180 degrees so you can use it as a tablet PC. You can write on the screen with an electronic pen or draw and erase. It has the same touch software as HP’s TouchSmart PC desktops; with the software, you can pinch, rotate, flip, press, or drag a finger across the screen to access info or activate programs.

You can use the laptop in PC, display, or tablet modes. The laptops come with touch-enabled games and Corel’s touch-painting program. The tx2 has a 12.1-inch diagonal screen and an Advanced Micro Devices dual-core Turion processor. The laptop weighs 4.65 pounds. It will be available on Oct. 22. 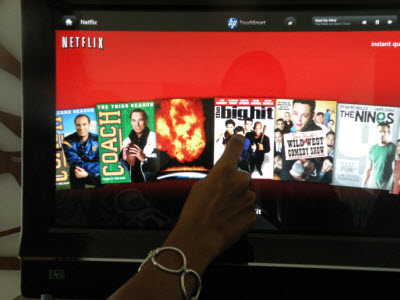 HP is also introducing its third generation of touch-enabled desktops. The all-in-one TouchSmart 300 and HP TouchSmart 600 desktops have wide screens for high-definition content. The 300 version (available Nov. 1) has a 20-inch diagonal screen and the 600 (available Oct. 22) has a 23-inch model. The 300 starts at $899 and the 600 starts at $1,049. The software comes with built-in touch apps such as Hulu Desktop, Netflix (pictured right), Pandora, Twitter, and the HP Music Store by Rhapsody. You can just touch the screen to pick and play movies, music, or send messages.

The good thing about these models is that HP is including more software that makes use of the touchscreens. You can use the webcam to snap your picture and then use the software to create a virtual character based on your image. You can then distort the image (pictured left) and have a ball. It’s the same kind of fun program that is built into Apple’s Photo Booth application.

There are other touch-enabled apps. The Recipe Box is a repository for your recipes, so you can use the vertically-standing TouchSmart in the kitchen. You use voice commands via a Bluetooth headset to operate the Recipe Box software if your hands are dirty from cooking. The Recipe Box software will read the instructions to you and the ingredients. HP is making the touchscreen interface available so software makers can customize their apps. 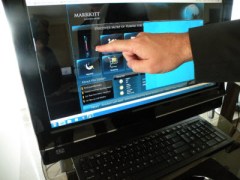 On the business side, HP is introducing the HP TouchSmart 9100 Business PC, a desktop computer designed for use in hotel, retail, healthcare and government applications. The all-in-one design can be used as a kiosk. It has a 23-inch screen with an adjustable stand. It comes pre-installed with Windows 7 and its pricing is to be determined. The PC can be used as a virtual concierge in a hotel, with touchscreen maps that make it easy to find places nearby.

There are a number of apps designed for the TouchSmart that fall in the category of “virtual assistants.” Digital Aisle makes Virtual Bartender software that helps people plan parties, look up recipes and get bartending tips. Businesses that buy the PC can go to nearby vendors and sell ads that will show up on the digital maps. The machine uses Nvidia GeForce 200 series integrated graphics. The 9100 ships in December for $1,299.

Along the same lines, HP is also adding a new entry in the 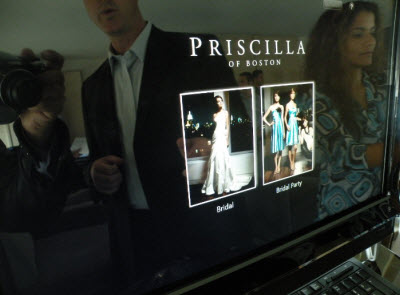 digital signage display business. The company pulled out of the flat-panel TV business after a couple of years. But this business is a little more suited to the big services-oriented company. HP entered the market earlier this year with a 42-inch model, and it introduced a 47-inch model last month. The new HP LD42200tm 42-inch liquid crystal display has a touchscreen with a high contrast ratio and full 1920×1080 HD resolution. It can be mounted vertically or horizontally. HP is partnering with software vendor Uniguest, which outfits the displays with software that makes it easy to find locations in a hospital on a map. Companies can also use the touchscreens to visualize clothing sales (right). The displays will be available for $2,799 in December.

HP also has a bunch of other products. The HP Elite 7000 business desktop PC introduces a new business brand. It has a metal surface and high-gloss black finish with the latest high-performance Intel processors, the Core i7 and Core i5 series of processors. It has built-in security and starts at $789. 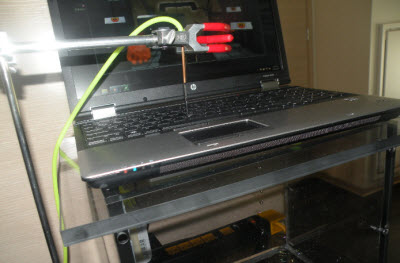 The HP ProBook 6545b Notebook PC and the 6445b Notebook PC are a couple of business laptops with magnesium alloy supports. These B series machines are follow-ups to the M series introduced a couple of weeks ago and the S series introduced in April. The B series can support DisplayPort, meaning they can be used to power more than one display at the same time. But one of the coolest things about them is that they have spill-resistant keyboards. The picture at right shows water being spilled into the center of the keyboard and the liquid draining out the bottom. There are channels underneath the keyboard that direct the water. Now that can of Coke isn’t so dangerous sitting next to your laptop.

They sport AMD processors and deliver 5 hours of battery life on a 6-cell battery and 8 hours of battery life on a 9-cell battery. They support new docking stations and have a Power Assistant that lets you conserve power, stretch battery run time, and accurately monitor your power usage. You can see exactly how many watts you save by operating in a low power mode, given HP’s own estimates of the cost per kilowatt hour of power. That means IT managers can monitor how much power a whole fleet of laptops is using and can set goals to reduce power usage over time. The laptops start at $799. For extra money, you can buy a new docking station (pictured) that comes with a key so that you can lock down the laptop and make it harder to steal.

HP is also introducing laptops, displays and desktops using the Compaq brand, which has appeal around the world as a “pragmatic” brand for first-time buyers, families with young kids, and small businesses. While the Compaq brand has billions of dollars in value, HP concluded it has been under-using it in the U.S.. Now it’s going to emphasize how the Compaq brand means you can get great value for your dollar with machines that are “just right” for what you need to do. If you’re buying a third computer in the house, HP hopes these Compaq models will make sense.

The Compaq Presario CQ61z notebook has a 15.6 inch-screen and yet it sells for the low price of $399 (after a $100 instant rebate). It has a choice of AMD processors and Nvidia GeForce discrete graphics chips. The Compaq 500B business desktop PC sells for just $359 and has an Intel or AMD processor, a 250-gigabyte hard disk, a gigabyte of main memory and Windows 7. The 505B sells for $409. Lastly, the Compaq Presario 4010f desktop has an AMD Sempron processor, integrated graphics from Nvidia, a 250-gigabyte hard drive. It sells for the astoundingly low price of $309.

The new displays range in size from 17-inch to 24-inch sizes and start at $190. All of these models suggest that HP understands that the recession is going to have an impact on buyers and that low prices are critical now.