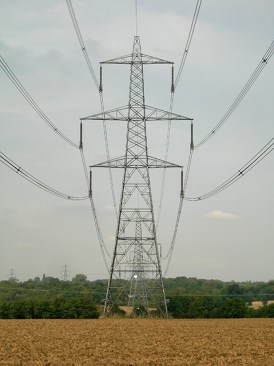 It’s been a bittersweet week for the U.K. when it comes to climate change. A government committee called for the isle to change its approach to global warming if it plans to hit its ambitious emissions targets. And one of its regulators estimated that it will need to spend 200 billion pounds (a staggering $316 billion dollars) over the next decade in order to make the necessary cuts in greenhouse gases. At the same time, the government announced that it has contracted Accenture to help ease its rollout of Smart Grid technology, which should push it closer to its goals.

The U.K. has been taking a lot of heat lately for its truly antiquated and problem-plagued electrical grid, inherited from the 1960s. With the U.S. and other European countries (other than Italy, which is working with an even more archaic system) moving toward cleaner, more efficient grids that channel data along with power, the U.K. is naturally interested in doing the same. Yet many worry that the country doesn’t have the technical brainpower to achieve such a massive transportation. Nonetheless, it’s setting out to prove them wrong.

Accenture will be charged with advising utilities as well as the government how to best install advanced meters capable of beaming energy consumption data between energy generators and their customers. The ideal system would also signal to utilities when peak demand is reaching dangerous levels, and why disruptions like brownouts and blackouts occur so that they can be easily and immediately fixed, saving millions in maintenance costs. On top of that, it would integrate more seamlessly with renewable sources of energy to supply solar and wind power — including energy generated by consumers’ rooftop solar panels or hydrogen fuel cells that can be fed back into the grid.

In order to speed development of a Smart Grid in the U.K., Accenture will need to highlight the financial advantages of such a system. Just like in the U.S., utilities are large and slow-moving — disinclined to adopt new practices unless there are financial rewards, or at least revenue parity. The consultancy says it will be working with the state’s Department of Energy and Climate Change to come up with incentives for utilities that embrace the Smart Grid.

Accenture is no stranger to the Smart Grid. In the U.S., it is partnering with Colorado-based utility Xcel Energy to run a pilot program incorporating these technologies. It also offers its Intelligent City Network — a portal for Smart Grid best practices that utilities can consult as they deploy smart meters and communicate changes to their customers. Presumably, it will tweak this information for the U.K.

The deal between the country and Accenture couldn’t have come at a better time — with the U.K. taking two big hits in this area. The first, a critical statement from the Committee on Climate Change, basically singled the sovereign state out as an environmental slacker. The group’s annual report, presented to Parliament today, said the country will need to cut its carbon emissions by 50 percent before 2020 in order to achieve its goal of an 80 percent cut (from 1990 levels) by 2050. A 50 percent cut in one decade is almost unthinkable. For context, even the most stringent legislation being pitched in the U.S. (the Kerry-Boxer bill) only calls for a 20 percent reduction in greenhouse gas emissions.

Even so, the report said an incremental decrease of 2 to 3 percent a year could be feasible if the government enforces renewable energy quotas and establishes a carbon tax (a very controversial recommendation). Beyond that, leadership should sprint to build three new nuclear plants by 2022, four clean coal plants by 2016, and 23-gigawatts worth of wind farms, the committee said. Right now, the U.K. has about 7 gigawatts of wind power in development. But it will need to reduce its emissions about six time as quickly as it is doing today.

This potential has made emissions and climate change a hot button political issues — one ripe for campaign platforms. The Conservative party is gaining momentum now, claiming that it will quickly approve construction of 5 gigawatts-worth of clean coal plants as well as nuclear power stations. Falling behind in the polls, the once dominant Labor Party could be in real trouble if it can’t devise equally attractive proposals.