Intel earnings beat the company’s own forecast — CEO Paul Otellini announced $9.4 billion in revenue for the quarter just ended, of which $1.9 billion was profit. That’s several hundred thousand dollars more than the company had forecast internally and most external analysts had predicted. 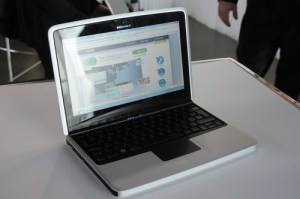 Nokia’s Booklet 3G wireless netbook will go on sale at Best Buy and AT&T in November — The attractive device’s pricing, which includes Nokia’s Ovi app store, will be announced on November 2. For now, we know the Ovi has a glass screen for better video display, like Apple’s MacBooks, and that there’ll be a substantial set of networked services offered to make the Booklet a viable work computer. The aluminum-cased Booklet has a hot-swappable SIM slot, so you can change carriers without taking the thing apart.

What I want to know is, why didn’t Nokia pack their press release with more, bigger, better photos? Gizmodo comes to the rescue as usual.

Nokia promises an insane 12 hours of battery life: “Leave your power cable behind.” We’ll wait until the first customer reports are in on that. 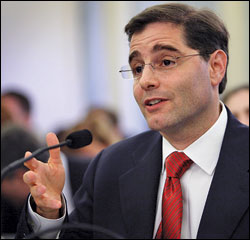 FCC chairman Genachowski wants tough open-Internet rules — The chairman has proposed adopting what sounds like everything the Net neutrality crowd wants. USTelecom president Walter McCormick wasted no time attacking Genachowski’s plan. “”Obviously the more prescriptive the government’s approach, the less innovation will be available for consumers,” he told the the Wall Street Journal.

Bloomberg wins bidding for BusinessWeek — The financial data firm’s winning offer for the 80-year-old publication is said to be in the $2M to $5M range, plus an agreement to assume liabilities that potentially include severance payments. More interesting is what customers will get out of this: “BusinessWeek, whose logo will eventually incorporate the Bloomberg name in some still-undetermined way, will continue to publish weekly in print and around the clock online,” writes BusinessWeek media blogger Tom Lowry.” The goal will be to substantially boost the magazine’s editorial pages.”

Google Wave already works on the iPhone — And it looks like another colossal time-eater. I’m too busy wasting my life on Twitter, but the VentureBeat gang have a Wave report in the works.

Wave is going to be like Twitter. You’ll find yourself trying to describe it, or listening to someone’s rambling description. We should all get invites from Google, so we can figure it out for ourselves.

Major blog founders’ departures would be devastating to valuations — TechCrunch without Mike! GigaOM with Om! VentureBeat without Matt! Your blog’s valuation is screwed without your star blogger. Douglas MacIntyre, a former board member if Jim-Cramer-centric site TheStreet.com, has gone so far as to estimate the losses in value should well-known blog leaders leave their sites: Huffington Post without Arianna Huffington? A 25% loss in value at least, says MacIntyre. Drudge Report without Drudge? A 90% drop. On the other hand, Nick Denton’s departure from the Gawker network of sites would not drop more than 15% from its value, because Nick hasn’t been as much of a personal face on his sites as these other folks.