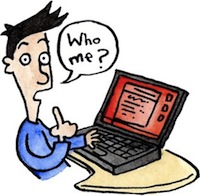 One of the greatest sources of embarrassment, or worse, when using email comes when you send a message to the wrong person accidentally. (Hence the proliferation of those annoying “Delete this message if you’re the wrong recipient” email signatures.) Google added a new feature to Gmail today that should help you catch those errors before hitting “send.”

“Got the wrong Bob?” has been added to Labs, the section for experimental features that may get added to standard Gmail. It’s useful during those times where you’re writing an email to a large group of people, when it’s easy to let a mistake slip through. Using the same technology behind Gmail’s “Suggest more recipients” feature, the webmail program tracks which people you normally email as a group (say, a team at work or a set of friends), and will flag the email if you’ve included someone who seems like a mistake. Google has also given “Suggest more recipients” the new name of “Don’t forget Bob?” which is more catchy, and makes it an obvious pair with the new feature.

Now, if you’re only sending the email to one or two people, Gmail can’t help you if you get it wrong.

This is the latest in a number of Gmail Labs features that help users avoid various possible mistakes while using email. Other examples include Mail Goggles, which stops you from sending drunken emails, and the ability to immediately “unsend” emails.