The social networking company hi5 used to be a big player among networks. There was a time four years ago when it was in the running for leadership position.

Since then it has lost momentum. It is stronger abroad than it is in the U.S. However, the U.S. market is important because social networks are able to get more money from traditional advertisers. In the U.S., the site has seen its traffic stagnate, according to Hitwise data (see right) and Comscore (see data below from August, the latest data available, which shows traffic lower than it was earlier in the year).

So it needs other ways to monetize. That means going full bore into virtual goods, where users are lured to pay for currency to play games. That’s what the site announced today: a major rehaul (seen here, but will launch officially tomorrow), with much more emphasis on games and the “coins” needed to play them. The overhaul includes Hi5 Stars, or 3-D avatars built in Adobe’s Flash format that can add engagement to the site.

The company needs to something big. The company is backed with $35 million in venture capital, and so the company no longer really has the option to stay small. It needs size, in order to produce the return expected by its investors. But with even large networks having a very difficult time hitting profitability (Twitter has roared past hi5 here in the U.S, but is still clearly in the red), the move is predictable. Betting on a game platform when so many others already exist smacks of being “me-too.” It also comes at a time when some popular social gaming avatar-based sites like Habbo Hotel are having to cut back staff. It’s tougher to monetize these sorts of things than many people realize.

If the site is going to succeed, it must show even more creativity than other sites. And here at least, it is serious. The site began a shift to social gaming more than a year ago, acquiring real-time interaction technology from a company called Picverse to help it. The company launched its virtual currency in late 2008, and launched a game channel earlier this year.

Featured on the new site will be a new 3D avatar that runs in Flash, where you can create avatar versions of yourself. This propels the avatar technology ahead of that used on most other sites, and is quite engaging. Later, the company is expected to launch games that will use the avatars inside the games, much like Nintendo’s Mii avatars on the Nintendo Wii can be used inside Wii games.

The company says it gets 60 million monthly unique users. Games now make up about a third of its traffic. Virtual currency already makes up 15 percent of the company’s revenue, and that’s expected to grow to 25 percent by end of the year. In other words, it’s betting that it can differentiate itself by being the network that most aggressively embraces social gaming. The questions is whether that is going to be enough, when users can already access social games like those produced by Zynga from social networking sites like Facebook.

[Update: The company says it is profitable and is on a $25 million annualized revenue run rate now. The company says traffic has grown from 3 million unique visitors a month in the U.S. a year ago to 4.6 million visitors now, according to Comscore. On a worldwide basis, traffic is flat but the company says it is going after “quality” users now. It also says engagement is up among users and that should grow stronger with the new avatars]. 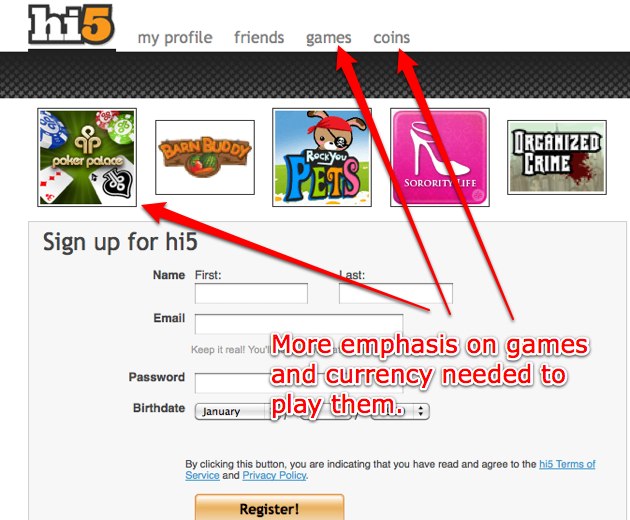