(Editor’s note: Bernard Moon is vice president of the Lunsford Group. He contributed this story to VentureBeat.)

With the downturn in the economy, more and more people are thinking about launching a new business or company. Whether you’re in the idea generation stage or have already started to build your product, you should take a breath and reassess whether the concept still holds your initial level of enthusiasm. Do you believe your product or service is critical to potential customers and not just one they’ll simply appreciate? If not, step back. Being a successful entrepreneur requires high (some say insane) levels of dedication. 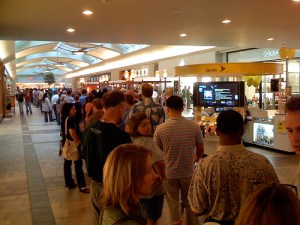 Many entrepreneurs are too close to their topic to realize where they really are on the user adoption curve. While you may hope that the jump from what Geoffrey Moore describes as “innovators” and “early adopters” to the “early majority” is short, it rarely works that way. Sales and user adoption rates are about as easy to predict as blockbuster movies.

One method to frame the product development process is determining whether your product is a “nice to have” or a “must have.” Granted, “must have” is a loosely defined term – but it typically boils down to whether:

For example, back in 2005, when I was working on my startup GoingOn Networks, we identified a trend of blogging and social networking entering the corporate world. We built a private-label social media platform, thinking that companies would soon recognize this trend and purchase our software-as-service platform.

In hindsight, the first two years were painful, comprised of a long education process, working on quelling fears of “opening up” to customers and another long sales cycle. We were hoping our market chasm would be the neighborhood creek, but we found out it was more like the Grand Canyon. Plus, by 2007, about thirty competitors were also targeting this market.

I realized that our social media platform wasn’t a “must have” and maybe not even a “nice to have” during our early years because our target market first needed to be greatly educated on the benefits of social media. It felt as if more often than not, sales meetings went like this:

Me: “Open, two-way communication with your customers is more effective…”

For consumer plays where users don’t pay for the product, the “must have” bar might be set a bit lower than for paid products, but it’s still a significant hurdle for the early majority to spend their time (even if it doesn’t cost money) on something new of which the benefits aren’t obvious, easy, or quick to grasp.

So how do you figure out whether your idea is likely to find customers and become a “must have”? Consider these techniques:

Trend Surfing. Extrapolate a current technology, trend, or “must have.” What is the next product in the evolution of that industry? (Consider the evolution from the Walkman to MP3 players to the iPod.) Or look at which emerging technologies will create new market opportunities. There’s Qualcomm and its CDMA technology, for example, or exercise trends that created a whole new market of Pilates videos and trainers. My personal favorite is the rise in popularity of specialty bacon, where I can also plug my “Ode to Bacon.”

The reality, though, is that it’s difficult to predict and ride such trends. I learned this from GoingOn, and my prior startup, HeyAnita, when voice recognition technology was hot. With competitors such as Tellme and BeVocal, our space raised over $300 million in 2000, but quickly faded a few years later when users didn’t widely adopt a voice-controlled interface.

Twitter seems to have hit the right wave on the trend from blogging to micro-blogging. Initially, it was just an echo chamber of Silicon Valley people tweeting to each other, but now even major media outlets such as CNN, ABC, and ESPN see communicating in 140 characters as a “must have.”

Identifying a Market Gap. Where in the market is there an underserved need? Is there a place in the market that a taste is not being met? Chipotle filled a desire for fast casual Mexican food. Netflix let people easily rent obscure movies and keep them as long as they wanted without late fees. Meebo met the demand for a single, unified IM platform. Find an element that’s missing in a market – one that you know and are passionate about.

Building a Better Mousetrap. What product category is doing well, but could be done even better? Do you have an idea for something that will clearly be the best of its kind? IKEA did it for the budget-conscious furniture retail market. Zappos.com turned shoe shopping into a very convenient, easy, low-pressure experience. The trick is finding features that are missing and implementing those to change the market.

Google has historically been a leader in this third technique – and Brian Rakowski, former lead product manager for Google’s Gmail product and current product management director for its Chrome browser, has some terrific insight into how the company has managed to do this.

“Both Google Chrome and Gmail were new entrants in existing spaces so we spent a lot of time getting to know the market-leading products in their categories and identifying the biggest user pain points,” he says. “For webmail, it was small storage quotas and clunky, inefficient interfaces. For browsers, it was general instability and unresponsiveness, especially on advanced webpages.”

Google succeeded nicely with both products. Gmail surpassed Youtube earlier this yea to become Google’s second-most-visited property. And Chrome has gained a market share of just under 3 percent in one year.

“In the end, the best way to test whether you have a ‘must have’ product is to threaten to take the prototype away from your early users,” says Rakowski. “If they don’t riot, start again.”

That’s a key point. Would users of Microsoft’s Vista have rioted if it had been taken away? No, there probably would have been celebrations throughout office buildings all over the world. What about Segway after all its hype? Maybe only mall cops would have grumbled.

Using these techniques to determine whether you are creating a ‘must have’ product is crucial, but just as important to monitor is your own excitement factor. If you’re not excited, it’ll be hard to make others view your product as something they can’t live without.