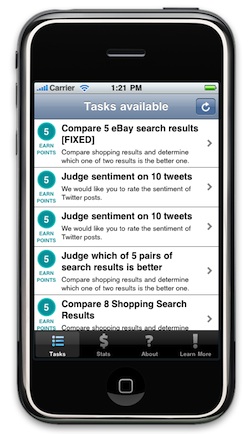 The iPhone is a pretty good way to kill short bursts of idle time — for example, I picked up an addiction to Apple’s Poker game after I started playing a couple times a day while I waited for buses. Now there’s an app called Give Work that lets you fill that time by helping refugees in Kenya, developed by startups CrowdFlower and Samasource.

The two companies have been working together for several months already. CrowdFlower (whose chief executive, Lukas Biewald, is a friend of mine from college) provides technology to help companies outsource menial tasks via platforms like Amazon’s Mechanical Turk, and it already allows companies to send those jobs to Samasource’s Refugee Work Program. Refugees in a camp in Kenya can log on to Samasource’s Internet connected computers, perform basic jobs, and get paid. However, the Samasource worker pool has a higher risk of inaccuracy (there are a number of reasons for this, starting with the fact that the cultural background of the workers creates a challenge on some of the tasks), so Biewald says he could only afford to send over bigger jobs, where it’s feasible to do more checking, and where a few inaccuracies are less of an issue.

The iPhone app means the arrangement makes more economic sense, especially for smaller businesses, Biewald says. That’s because the iPhone user contributes free work. Whenever you’ve got small batches of free time, you can log into the app, then do a small set of CrowdFlower tasks, which are represent a sample of the tasks sent to Samasource workers — for example, identifying the sentiment expressed in different statements on Twitter, or generating keywords for different images. (There’s s social gaming component, where you get points for completing tasks.) Again, these are often tasks where an American iPhone audience has more relevant cultural experience, and is therefore more likely to be accurate. CrowdFlower still double-checks your results, but then uses those results as both a check and an example for the workers in Kenya.

The result, hopefully, will be greater accuracy without additional cost.

CrowdFlower launched at the TechCrunch50 conference.