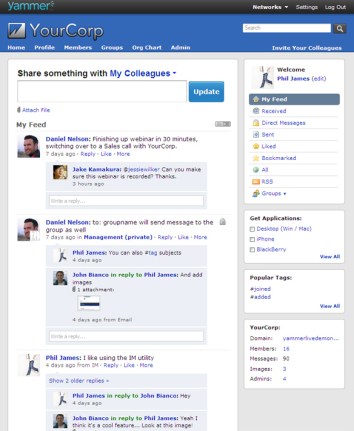 Editor’s note: This story is part of our Microsoft-sponsored series on cutting-edge innovation.

As Facebook, Twitter and other social media tools have changed the way companies reach out to customers, some are using it internally to upend the way rank-and-file employees relate to each other and management.

They’re harnessing tools like Yammer and Present.ly, which are Twitter-like services designed specifically for enterprise use in that they meet the need for secrecy and hierarchy.

These types of services are reconstructing the flow of information through a firm — instead of asking a question or making a suggestion up the chain of management, ideas can flow horizontally through an organization. This cuts down on all the bureaucratic impediments that might keep a project from getting out the door.

In lieu of reports and meetings, corporate microblogging services provide a constant hum of updates informing managers and colleagues about what employees are doing. It makes it easier for others to chip in with ideas and workers to feel more accountable for their actions by the hour. A one-to-many model of information flow cuts down down on e-mail and can make a large, international corporation feel like more tight-knit.

Yammer offers several service levels to accommodate all sorts of businesses from the small five-man shop to a multi-billion dollar corporation with tens of thousands of workers. There’s a free version that offers basic features like microblogging and file-sharing, but if a company wants to invite users with outside e-mail addresses or monitor the conversation for specific keywords, they’ll have to pay $3 per user a month.

That version lets the company own the data shared through Yammer. For big companies, users can set up groups of Yammer accounts for different teams and make the service dovetail better with IT security needs. The most expensive model is $5 per user a month. Companies have the ability to suspend or remove former employees at all tiers of the service.

“We might actually create a network effect where there would be a pretty good reason for you to be on Yammer if all your partners, suppliers and vendors are,” Sacks said.

For example, Sacks said a doctor in a hospital using Yammer was facing a life or death situation: a patient under 18 had come in and was in serious need of an operation. But the doctor didn’t know whether they had legal authority to go ahead without parental consent. A quick status update on Yammer brought an answer from another doctor that gave them the green light to operate. It may have saved the patient’s life.

Another Yammer customer, Molson Coors Brewing Co., the biggest beer company based in North America and maker of Coors Light, has between 1,600 and 1,700 people using the service after launching it internally a few months ago. The company’s CEO Peter Swinburn is a top 10 user, posting constantly while abroad on business trips.

“It’s become our virtual global water cooler,” said Miguel Zlot, who is an IT solution architect at Molson Coors. “We have completely untapped intellectual wealth that we don’t know about. Social networking is allowing us to bridge those gaps and think in a collaborative way.”

Zlot says successful ideas in Canada get passed on to the U.K. through Yammer. Once, a sales representative posted some pictures of damaged Coors cases in a Canadian retail outlet on Yammer. Another employee saw the photos and was able to identify the production line and brewery responsible for the cases. The brewery manager investigated and then fixed the problem.

But enterprise microblogging services don’t have the market sewn up. They face a host of related services tailored to the enterprise like online and mobile conversation-tracking offerings — from the likes of Zenbe and Google Wave — that are re-imagining traditional e-mail. After wrestling with the idea of incrementally improving e-mail, Zenbe started from scratch and came up with Shareflow, which is essentially a dashboard for monitoring the flow of conversation around a single topic that incorporates e-mail. And Google Wave blends the immediacy of instant messaging with the permanence of media rich and threaded e-mail conversations.

Yammer’s Sacks say this is too much and that simplicity is the road to greater adoption. Like Twitter, enterprise microblogging services keeps things pretty spare: just text and occasional thumbnails of images.

“There’s this idea of turning e-mail into the document that does everything — it’s a wiki, you can stick widgets in there and you can have multiple people editing each others comments,” Sacks said. “But we’re not interested in e-mails doing more. We want them to do less.”

Also see previous stories in our Conversations on Innovation series:
Healthcare: It’s time for technology
The new healthcare: Smart band aids, digital pills, wrist bands
Not everyone’s ready for the cloud: 8 roadblocks software developers face
Is it time for business to embrace the cloud?
Speech, touchscreen — been there, done that. What’s the user interface of tomorrow?
How phones emerged as main computing devices, and why user interface will improve
Put your finger on it: The future of interactive technology
“Touch” technology for the desktop finally taking off