Get ready to read the daily diary of the American geek dream. GeekChicDaily is debuting today as a daily email newsletter and web site that covers geek culture in all of its dimensions. The publication will cover video games, technology and apps, comics, collectibles, gear, TV shows, and film.

These publications come and go. But this one has interesting ambitions and backers. The partners include Peter Guber, Oscar-winning producer and chief executive of Mandalay Entertainment; Geek culture expert Gareb Shamus, and digital entrepreneur Peter Levin. 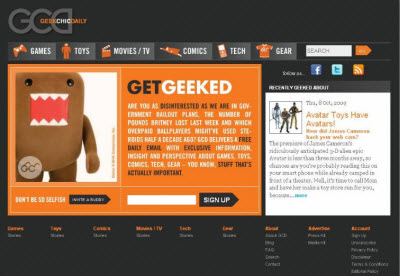 “It is the definitive voice of geeks everywhere who are influencing media and entertainment at a rapid pace,” said Levin, in an interview. “The tone is going to be snarky and sharp.”

The publication is both a web site and a free, opt-in daily email newsletter. Over time, it will be distributed via links on social networking sites. It will spotlight creators and luminaries, offer opinionated tips, and make recommendations that are a reflection of the GeekChic lifestyle and personality. It is being unveiled at a Shamus’ own super geek event, Wizard’s Big Apple Comic Con.

Scott Gramling, former editor-in-chief of men’s magazine FHM and comic-focused Wizard, is GeekChicDaily’s editor-in-chief and is responsible for the tone of the publication. Shamus will be contributing as well and will bring a following from his role as founder and publisher of Wizard magazine as well as owner of Comic Con festivals in five major cities. He is one of the self-proclaimed geekerati. Levin was an early investor in Gamespy Industries, a game site that was purchased by Fox.

The whole idea is to deliver information that hardcore fans lust after and have to know before the rest of the world discovers it. And the bet is that people aren’t going to be embarrassed about being labeled geeks, who are now a fixture in pop culture. Levin said the content will be very different from other geek publications such as Wired, Engadget and Gizmodo.

GeekChicDaily will use freelance writers, working for Gramling. The company is funded by Guber, Mandalay Corporate Enterprises, Kyoraku Yoshimoto Holdings in Japan, and Ken Wegner of the Jel Sert Company. Oddly enough, I feel like I’m dead center in terms of the demographic they’re targeting. And I’m proud to be a geek, dammit.