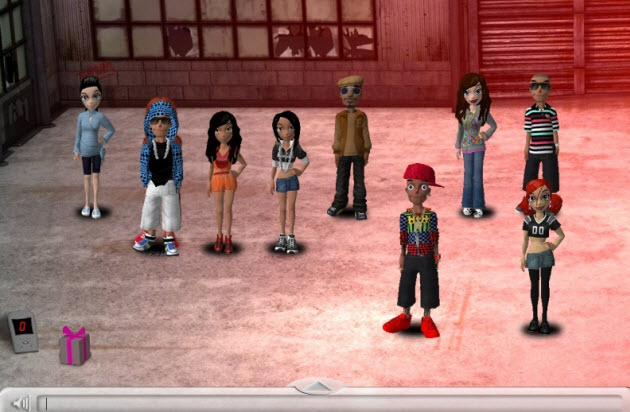 Meez has built a virtual playground for 13 million teens in the past couple of years. Now that playground is going to get a lot bigger and more crowded as Meez integrates its Meez Nation virtual world into MySpace. 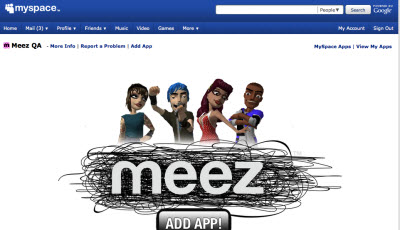 Meez users will be able to log into their virtual world directly from within the MySpace social network, almost as if the virtual world is a widget on a MySpace page that lets you dive into another world. The partnership promises to help MySpace with user engagement, one of the closely watched metrics for how well a site hangs on to its users. Meez says it ranks No. 5 in engagement for online destination sites in the U.S. In June, Meez managed to hit No. 1 in engagement, at 36.4 minutes per user, according to market researcher MediaMetrix.

With Meez, users can create cartoon-like avatars, or virtual characters, and chat with their friends. They can express themselves by decorating rooms and buying virtual clothes. They can also wander around in the Meez Nation virtual world, which launched 14 months ago. That world has a variety of neighborhoods, public hangouts, and personal “Roomz.” The most popular thing that users do is dance to music in these rooms, said John Cahill, chief executive of the San Francisco-based company, in an interview. Business is good because of the growing popularity of virtual goods, Cahill said. 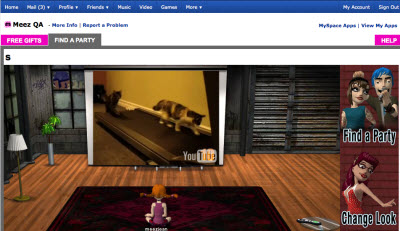 Since MySpace is loaded with web-savvy teens who love to share videos and music, the social network is likely to be a good match for Meez in co-marketing efforts, said Cahill. Meez users are watching a million videos per day, and they’re playing over 100,000 games. Each time they log in, they spend about an hour on the site. About 90 percent of users are in the U.S.

Traffic has hit three million unique visitors a month. The company makes money through ads, virtual goods, and paid subscriptions. One of the most popular things to do is send branded virtual gifts to friends. Advertisers include Nike, RocaWear, Clone Wars, NBA, NHL, and others.

Cahill said MySpace is the first of a number of sites that will integrate the Meez Nation virtual world into a branded site. Meez has been profitable since the second quarter on an operations basis, and it turned cash flow positive in July. The company made its Meez avatars available on mobile phones on the KDDI and Verizon Wireless networks.