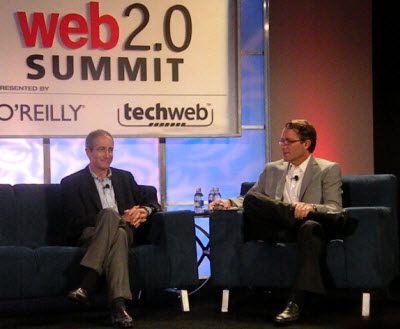 Roberts is making those multibillion dollar investments because he believes that applications will emerge that will consume all of the Internet bandwidth that he can provide to consumers.

He also said that Comcast isn’t shy about investing in content, such as TV shows or Internet content properties. (Comcast is rumored to be in the bidding to buy NBC Universal, but Roberts said he couldn’t comment on that).

“If you go into content, good things happen,” Roberts said. “We are in the business of delivering content to homes and consumers.”

He unveiled one of the company’s major new investments in his talk. Roberts showed off a new beta version of a web site, Comcast Fancast, which will launch later this year as an entertainment focused web site where Comcast subscribers can access a ton of movies and TV shows, available to watch anytime, on demand, via a web-connected computer.

“This will be available to every HBO/Comcast customer by the end of the year,” Roberts said. 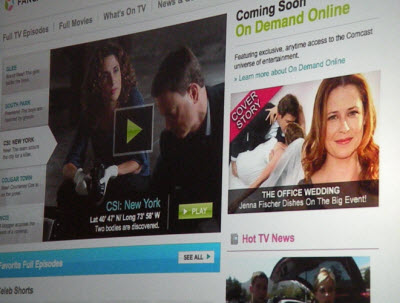 He made the comments in a conversation with conference co-host John Battelle at the Web 2.0 Summit in San Francisco today. (We’ll be blogging about a lot of the speakers at the conference, which runs through Thursday). The summit isn’t as big as it was a year ago and it is in a smaller venue, but the room is packed.

Roberts said that Comcast invested heavily in cable modem technology, which delivers broadband service over cable TV lines, 15 years ago and it has paid off. Comcast is now the largest Internet service provider in the country and it is again investing heavily. In some parts of the country, users are getting 22 megabits a second broadband service now. Roberts said that for the past three years, Comcast has been investing at least $5 billion a year in upgrading its network so that it can deliver 100 megabits a second broadband service using the DOCSIS 3.0 cable modem standard.

On the content side, Roberts said that the company has steadily built its cable content properties over the years and  is investing to make sure that Fancast will have an infinite amount of content. Comcast offers 10,000 shows on demand now via its digital cable service and is heading toward 20,000 shows.  The reason that content investments pay off is that they help the business model, Roberts said. Comcast can charge subscription fees for content and reap advertising revenues at the same time. Hence, that’s why the investments in both content and distribution make sense.