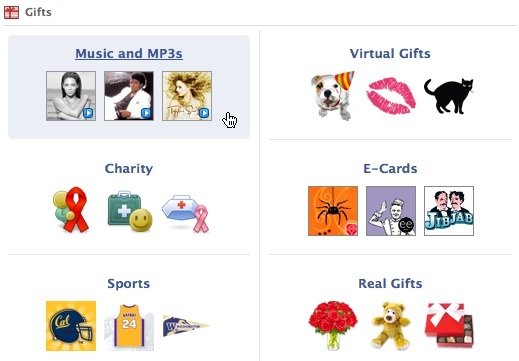 Facebook’s making a deeper foray into the world of virtual goods by adding songs and sports merchandise to its gift store. The company’s partnering with Lala.com to offer tracks for about 10 cents each. They’re free of digital rights management (DRM) and you can download them. Users have to pay for them with Facebook’s virtual currency called Credits, which can be purchased online with a credit card.

Facebook’s also launching a partnership with the NBA and Major League Soccer to sell branded virtual jerseys online. A few universities like Stanford University and Oklahoma state are joining in as well. Last but not least, there are charities like Kiva, Project Red and Charity Water that users can make donations to through the gift store. In return, a virtual gift will appear on your profile or on the profile you’re making the donation on behalf of.

The move isn’t surprising given the runaway success of social gaming companies like Zynga, which may be on track to make more than $200 million in revenue this year on the back of virtual goods. Facebook already made an estimated $40 million off its gift store last year and this is one revenue model it could stand to build out.