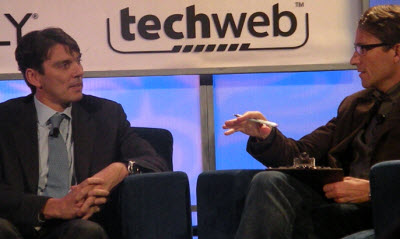 AOL chief executive Tim Armstrong is prepping his company for life after Time Warner, and he remains committed to a strategy of investing in web content.

Armstrong, a former Google executive who took the AOL job eight months ago, told the crowd at the Web 2.0 Summit in San Francisco that his division of Time Warner is on track for a spinoff from the media conglomerate in the next year.

He also said the company has doubled down on its investments in content recently, such as expanding AOL’s stable of journalists from 500 to 3,000. Those journalists include a number of freelance writers who cover a wide variety of things that are available exclusively on AOL’s various channels for its web portal.

Armstrong hinted of a big change coming to AOL’s “secret sauce” related to the journalist hirings. He teased that the company has been working on it for three months and it is built around a broader platform for showing off content, from web video to blogs to local information sites.

Armstrong has a big challenge in turning around AOL. The company has 270 million unique visitors a month worldwide, with more than 100 million in the U.S. It is profitable, with lots of money coming in still from old fashioned dialup Internet access, which was its first real business many years ago. But the web has battered AOL’s walled garden and its growth has stalled. Time Warner merged with AOL in 2000 in a $350 billion deal. When AOL is spun off, it will get a new valuation, but it’s clear that the spinoff is likely to be nowhere near that original amount.

Armstrong said he took the job because AOL has great assets and that they are undervalued in the changing web landscape. Those assets are in content, communications and ads. He said he wanted to learn and grow, and that AOL is a place to do that. He said AOL has been focused on getting its house in order to be a stand-alone company, focusing on everything from investor relations to cost-cutting. He said these were all tasks that usually are done one at a time, but that AOL is moving fast on them. The overall goal remains getting more users.

“The strategy we have is focused on a growing a large platform around content,” said Armstrong. “About 80 percent of the content we have we generate ourselves. We will continue on that path.”

Web 2.0 Summit co-host John Battelle asked how AOL would scale its investments in content. Armstrong said that “fragmentation is our friend,” much like TV channels become much more focused on user interests when there are 300 of them instead of just three.

“Content can be deeper and more individualized,” he said.

AOL’s valuable contract for a search provider is coming up again in a year or so. In 2007, the company set off a huge bidding war between Microsoft, Yahoo and Google when it put its search partnership up for bidding. AOL’s users do so much searching that winning the right to be AOL’s search engine can actually change search market share numbers. Google won, and it still has a good relationship with AOL management. But Armstrong said he was not under pressure to do that deal fast and the company would look to AOL’s best interests when it awards the deal.

Armstrong offered an update on AOL’s Patch project. That is a test in 10 local towns where the idea is to digitize everything about the town so that the information is completely accessible on the web. That’s an example of investing in local content and replacing the paper-based Yellow Pages directories via the web.