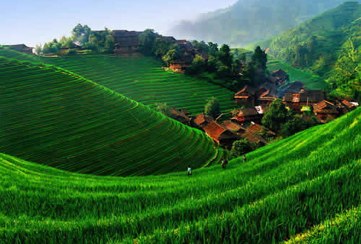 First Silicon Valley venture capitalists, and now the Obama administration, are fretting that China might overtake the U.S. as the leader in green innovation.

And their fears are well-placed. A survey of Americans about their views on greenhouse gases, released yesterday, shows fewer Americans see evidence that global temperatures are rising. Only 35 percent of people polled by the Pew Research Center earlier this month said they see global warming as a very serious problem, down from 44 percent in April 2008.

This, combined with fear-mongering by business lobbyists and politicians who support coal and other carbon-heavy industries, could threaten the ability of the U.S to pass ambitious “cap and trade” legislation early next year. But legislation is urgently needed to set a floor price on carbon. By setting that price, industry would be encouraged to invest in other renewable energy sources, something that could spark a wave of innovation in clean energy.

Yesterday, U.S.   Energy Secretary Steven Chu and Commerce Secretary Gary Locke met with business executives to promote climate change legislation, claiming that China could edge out the U.S. as leader because it has ordered strict renewable energy and efficiency goals. It has called for fuel efficiency standards for cars that are more stringent than the U.S. (42 MPG versus 39 MPG), passed a bigger investment tax credit for solar energy and wind energy (50 percent versus 30 percent), and legislated 20 percent use of renewable energy by 2020.

Their message came after venture capitalist Steve Westly told a cleantech conference here in Silicon Valley that the Chinese government is moving faster that the U.S., despite the massive investments the U.S has been making in the Smart Grid. “China will pass the U.S. in 20 years as the largest economy in the world, he reportedly said. “There are only two countries that matter — the U.S. and China. They create 40 percent of the world’s pollution, and the other 191 countries divvy up the rest….I go to China every 90 days — China knows the big health issues they’re facing,” he told the audience at the Cooley Godward law firm-organized conference. Westly recently raised a $140 million fund, and he’s looking for investments into China’s green industry. We’re told his firm should soon make an announcement about an investment there.

The U.S. opinion about global warming comes despite overwhelming consensus among the world’s scientists that global warming is fact, and that the Administration has already warned that urgent action is necessary now to avoid catastrophe. According to the survey, however, 56 percent of Americans do think the U.S. should join other countries in setting standards to address global climate change.

Here’s Wall Street Journal reporting on the comments by Chu and Locke:

Both Chu and Locke recently returned from a tour of China, and the gains the Communist state has made in the industry through its clean-energy fiats, “demonstrates to us…just how much more concerted and aggressive we have to be to respond in terms of climate change and renewable energy,” the commerce secretary said.   ”It’s a matter of economic competitiveness,” Locke said.   ”If we don’t get our act together, we’re going to be watching the capital, the business and the good-paying jobs end up someplace else. Some 10-15 years from now, we’re going to be saying, ‘How did Shanghai become the Silicon Valley of clean energy?'” he added.   Chu said Democrats’ plans to ratchet down greenhouse gas-emission levels in the U.S would “spur innovation that will far exceed what China can ever do.”   Though the House passed a landmark climate bill earlier this year and Senate committees next week will begin consideration of a similar version, a raft of political hurdles lie ahead for the legislation.

If you’re an executive in the green technology industry, you should consider coming to GreenBeat, the seminal conference on Nov. 19 about the Smart Grid, for executives and entrepreneurs. We’re showcasing the most disruptive technologies to challenge the existing carbon-based Smart Grid. Former Vice President Al Gore will be among the keynotes. But now and you can get a discount.