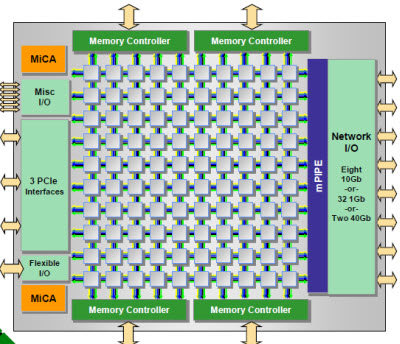 Networking chip maker Tilera is debuting a chip today with 100 computing brains. It believes that this hydra beast will be able to improve the computing power of data centers while reducing their power consumption at the same time.

The Tile-Gx100 processor is targeted at replacing Intel server chips in data centers, running cell phone networking equipment, and consolidating lots of network equipment into smaller devices. The chip has 10 times the performance per watt consumed as Intel’s fastest Nehalem-class server microprocessors, which are just hitting the market. That means Tilera-based data centers can be much greener than those using other chips.

The tough job will be to convince big customers to deviate from standard Intel, Texas Instruments, or Cavium Networks chips and adopt Tilera’s. It’s never easy for programmers to figure out how to keep lots of cores, or computing brains, busy doing useful work. That’s why current Intel chips max out with eight cores, and many computer scientists think that core efficiency maxes out at 32. 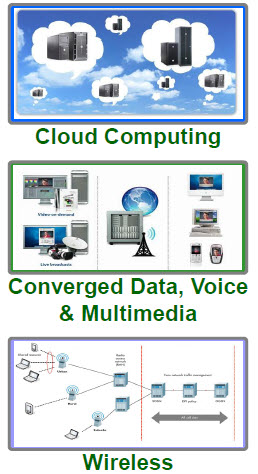 But San Jose, Calif.-based Tilera argues it has come up with an easy programming model with tools that make the process of creating software to run on Tilera’s chips much easier. The problem with many current multicore chips is that they use older cores that were designed for single-core usage. Tilera, on the other hand, came up with brand new cores and a brand new interconnect system that could feed data into the cores at high rates of speed. The interconnect can transfer data at 200 terabits a second.

Tilera is in the midst of closing a $25 million funding round. It already acknowledged that Quanta, the world’s largest laptop manufacturer, has invested $10 million into it. Quanta’s interest is in cloud computing, or data centers that process lots of data and send it over the web to client computers so the clients themselves don’t do much computing. Other investors include Bessemer Venture Partners, TSMC, Columbia Capital, and Walden International.

Bob Doud, director of marketing, said customers are lining up to order the newest chips. They want to use them in processing media in wireless systems, screening Internet traffic for security, and launching high-quality video conferencing systems. With the new 100-core chip, Tilera will now have chips with 16, 36, and 64 cores. It launched the 64-core chip a year ago. Tilera competes with the likes of Intel, RMI, Cavium Networks and others.

Tilera has 65 employees and was founded in 2004. It launched its first chip in 2007 and now has 75 customers. The company’s chief technology officer is Anant Agarwal, a computer science professor at MIT.