Adobe and Salesforce.com announced a partnership today that brings together Flash and Force.com, their platforms for building and launching web applications.

Adobe Marketing Dave Gruber and Salesforce Product Marketing Director Eric Stahl say it makes sense to combine the media-rich, interactive features of Adobe’s Flash with the online infrastructure and business focus of Salesforce’s Force.com. Until now, bridging the two platforms required a lot of work from the individual developer — you’d have to build the application in Flash, then figure out the right way to connect it with Force.com’s application programming interfaces (APIs). With Adobe Flash Builder for Force.com, developers can just build the app in Flash, tell the program that they’re building a Force.com app, and it will handle many of the backend details.

Altogether, this should make it possible for a much broader swath of developers use build and app in Flash and launch it on Force.com — asked if this will appeal more to Flash or Force.com developers, Gruber says, “Both — that’s why we think this is such a synergistic opportunity.”

Specifically, Gruber and Stahl say the partnership creates possibilities for three different kinds of applications. First, you could add features to Salesforce’s customer relationship management (CRM) application, for example using Flash to create interactive charts comparing a user’s different sales leads stored in Salesforce. Second, you could build non-CRM related business apps for the web, such as an e-commerce site that uses Flash to enable a drag-and-drop interface, so customers drag the items they want into their shopping cart. (See example below.) Third, you could use Adobe’s AIR format to create apps that also run on a user’s desktop, so they can still use the app when they lose Internet access, and then have everything synchronize once they’re back online. 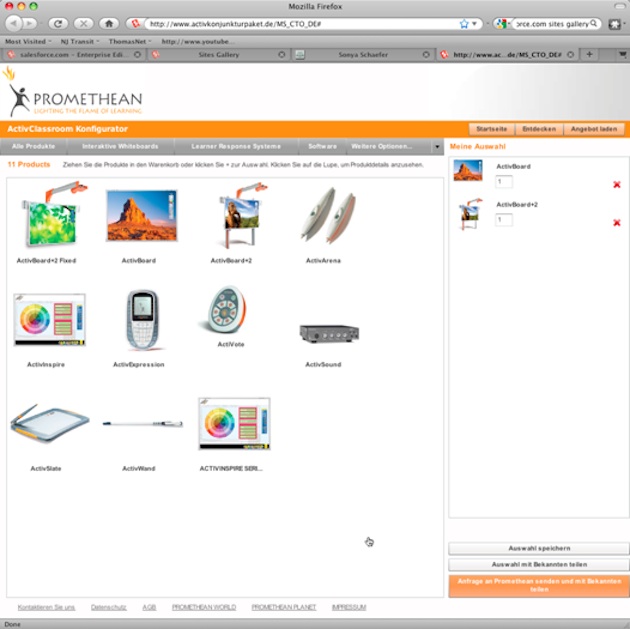 Flash Builder for Force.com is available as a developer preview now, with a finished version scheduled for the first half of next year. Developers will need to pay for both Flash Builder and a Force.com account (which is goes back to that whole “synergistic opportunity” that Gruber was talking about).

Both companies have made another improvements in the last few months to expand the reach of their technology, with Flash coming to many smartphones, including (in a limited way) the iPhone, while Salesforce recently launched a way to build public websites on Force.com.