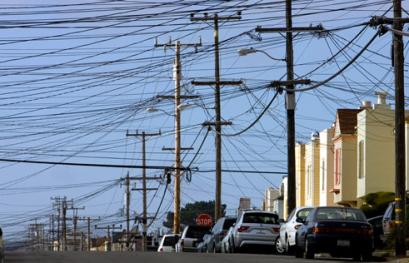 [Update: The initial article misstated that the CEO of Ice Energy threatened to file a lawsuit against the Department of Energy if denied a grant, when he only speculated that some executives might choose to go this route.]

The Department of Energy is getting ready to announce the recipients of $3.4 billion in stimulus package grants to utilities looking to adopt smarter, more efficient electrical grid technology, as early as tomorrow. The department said the news, to be announced by president Barack Obama himself, wouldn’t come until early next week, but Reuters reported differently, predicting the the president will use his trip to the DeSoto Next Generation Solar Energy Center in Florida tomorrow as a well-timed venue.

The Smart Grid Investment Grant program, is said to have received hundreds of applications for the less than 100 available grants. With the DOE promising to break up about 40 percent of the $3.4 billion into chunks of $20 million or less, it looks like some smaller utilities struggling to launch their first Smart Grid programs could finally get a leg up. This could be a mixed blessing, though. A lot of the larger utilities — Duke Energy, Dominion Resources and Baltimore Gas & Electric among them — have applied for the maximum allotment of $200 million, which could substantially shrink the number of them that actually get the money they need.

Since applications for the money were filed in early August, many utilities have been in a holding pattern, waiting to see what they get before rolling out massive smart metering campaigns or implementing an acquisition strategy for new technology. Still, many industry analysts say the stimulus funds have already benefited the Smart Grid space, even before making an appearance. A lot of Smart Grid related companies and startups like Trilliant, Control4, Echelon, Ambient and others have already seen a boost in business in anticipation of utilities receiving government funds. Regardless of who gets it, there’s about to be a lot more money floating around for these players.

The private investing arena has also been galvanized by the impending financing. Because matching funds are major requirement for the grant money, the $3.4 billion could yield as much as $5 billion in investments from venture capitalists and private equity funds. And because the government has focused so much of its time and attention on the space, these private investors are feeling better about the relative risk involved. It’s not far-fetched to expect Smart Grid companies to reap millions in 2010 following multiple waves of government support.

It will be interesting to see what the government decided to do with some of the irregular utility applicants, trying to eke out more money than the $200 million cap allows. The prime example is Oncor, which made different requests for $200 million for its 3.4 million smart meter deployment, $58 million for telecommunications solutions and another $58 million for distribution automation systems. Will the DOE consider these as separate projects, or only dole out the $200 million — if Oncor gets anything at all.

The fallout from tomorrow’s announcement could very well be more nasty than hopeful. As GreenTech Media reported earlier, [CORRECTION: the CEO of grid storage technology provider Ice Energy, Frank Ramirez, SPECULATED that some companies may consider suing the DOE if denied funds. He did not himself threaten to sue.] There will after all be a significant number of losers for the government to contend with.

Regardless, Obama will surely try to turn tomorrow’s announcement into a positive step toward a cleaner, more efficient electrical grids. Reports say he will not only be announcing the funding, but also laying out a general plan for U.S. Smart Grid development — whatever that might entail. He will also probably link it to the Kerry-Boxer climate bill pending in the Senate, emphasizing them both as efforts to decarbonize our current energy use to reduce global warming. In doing so, the Wall Street Journal predicts that he will tout the Smart Grid as a necessary, preemptive step before renewable sources of energy like wind, solar and geothermal can be widely incorporated into our national energy mix.