Facebook is having one-on-one meetings with some of its larger developers detailing a series of changes that could significantly affect the way applications are spread through the social network. They may go through some of the proposals at this Wednesday’s Facebook Developer Garage in Palo Alto, Calif.

From what we hear, Facebook is reshuffling all the traditional channels like notifications and requests that developers use to reach new users and tucking them away in harder-to-reach parts of the Web site. The idea is to give users more control over the information they see on their homepage. Before, if a person signed up for a new game or reached a new level, the app would send out an update to all their friends’ news feeds right on their homepages. The problem was that the activity stream could get overwhelmed with updates that may not have been all that relevant to other people.

So Facebook’s trying to clean that up a bit. In effect, these changes could also make outside companies more dependent on paid promotion like advertising to acquire new users, giving Facebook a larger share of the revenue its biggest game developers like Zynga and Playfish are generating through virtual goods.

Facebook declined to say much, stating: “We’re always testing ways to improve the user and developer experience, but we have nothing to announce at this time.”

So here are some of the changes Facebook is experimenting with:

1) Notifications, which are at the bottom left hand corner of the page, may go away altogether or be tucked into a subsection of the site. This is important because in many asynchronous games (where you’re playing someone who isn’t logged on at the same time you are), ‘Notifications’ are used to tell a player that it’s their turn in the game. 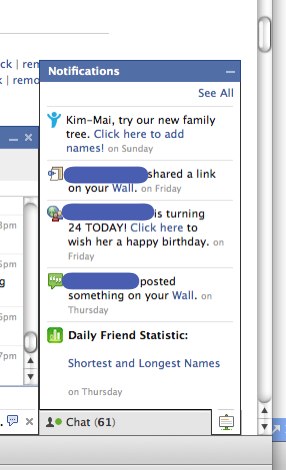 2) Requests, which are usually at the top right-hand of the homepage, may get filed away into a part of the messages inbox. Facebook’s inbox may get a bit more complicated because of this, because the company will need to sort out different types of messages.

3) Facebook is also pushing developers to get users direct e-mail addresses, instead of relying on the social network as a communications middle man. They’ve been doing user testing with different interfaces — Facebook wants to make it really clear that a person is giving their e-mail address to an outside company.

4) The company may get rid of the ‘Boxes’ tab on the profile page.

5) In what may help some outside companies, Facebook may add a ‘Games’ tab to the left-hand column. This may make up some of the lost visibility. But it may not attract the Facebook users who play social games that don’t think of themselves as hard-core gamers.

6) One of the bigger changes to app virality was actually released on Friday, when Facebook introduced a ‘Top Stories’ feed in addition to a ‘Live feed’ of updates. Now a user’s home page shows updates that are deemed important because a lot of people have commented or reacted to them (or because you’ve shown a lot of interest in that person because of your historical activity on the site).

Now you have to click to get a ‘Live Feed’ of updates that shows what people have been doing in chronological order. That older live stream was an important channel for developers, because it would show activity in a game directly on the homepage. So if you were a developer, 100 percent of all gaming activity you published to a person’s stream would go to the homepages of their entire friend network. Now it’s less likely that their friends will see that activity.

All in all, this may mean more multimillion dollar advertising campaigns to rack up new users. As much as one-third of Facebook’s advertising revenue this year may come from social games, estimates social gaming expert and venture capitalist Tim Chang, a principal at Norwest Venture Partners.

It’s a smart move for Facebook, but hopefully they won’t kill their golden goose.