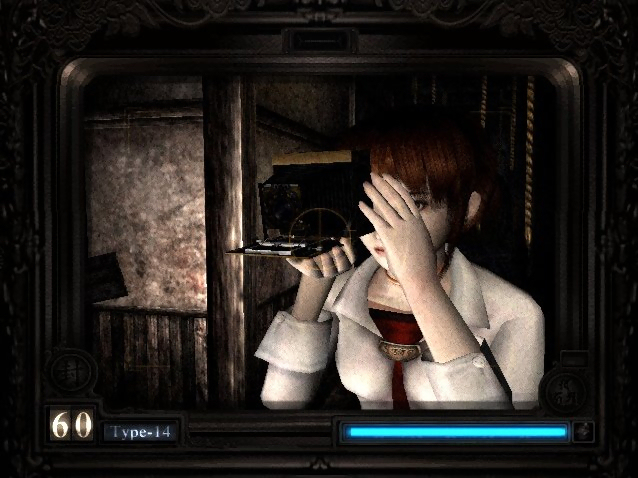 Although this is just in time for Halloween, I did not finish Fatal Frame. It was not because I was to scared. It was not because I grew bored with the story. I simply ran out of ammo. Can you believe it? I have been playing Fatal Frame for the Playstation 2 intermittently for about 2 months. Had it not been a perfect storm of user error on my part and brutal, archaic game design on developer Temco’s, this positive review would [or could] be more in depth. My PS2 catalog playthrough continues.

At this point during my Playstation 2 playthrough, I am actually regretting my Playstation 3 purchase from earlier this year. I am getting a smidge spoiled with next-gen gaming and it took a crudely designed Fatal Frame to make me realize this fact. In Fatal Frame, you play as Miku who is looking for her older brother Mafuyu in … get this … a haunted house. You are armed with only your wits, a flash light and a vintage accordion-bellowed camera. At this point, you can see this is very much a Japanese game which would appear to be capitalizing off of the boom of Japanese horror movies that have been all the rage in the States. However, movies like The Ring [2002] and The Grudge [2004] both came out after Fatal Frame [2001]. Another interesting point is that Fatal Frame is based off of a true story. Or a story in which events happened around a certain area and said area is forever drowned in local folklore.

The game on a technical basis has issues. If you had problems playing the Resident Evil games on the PSOne, then there will be an equal amount of “terrifying” control issues for you to adjust to. It does add to the experience when running and stopping then shooting ghosts, but these tank controls are an experience better mastered in Resident Evil 2. Why would anyone want to fight both controls as well as what you are “supposed” to be fighting in-game is beyond me. 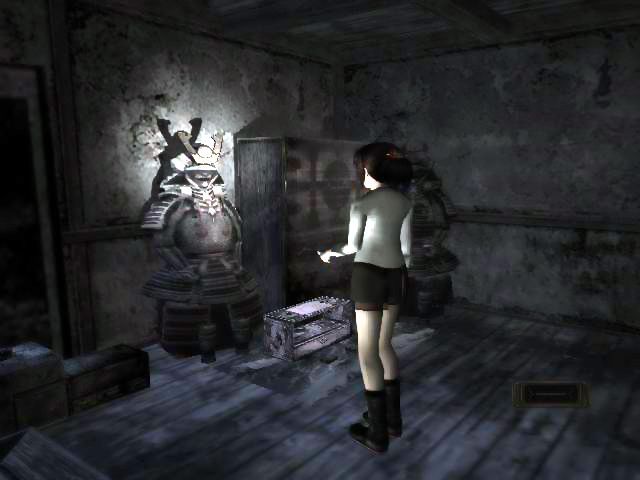 The key technical issue, I took umbrage with is the game’s design as it relates to strict survival horror. The reason I was not able to finish Fatal Frame was because after a boss encounter nearing the end of the game, I used up all of my film [you’re only ammo in the game] you are forced to save [which is usually a good thing]. After this save you have to face several enemies before getting any film. In some cases you can dodge and take minimal damage from ghosts, but in my case a door was locked until I could defeat an enemy. Naughty, naughty, bad game design!

As I stated earlier, it is partially my fault. Very early on in Fatal Frame, the game instructs you that save points are also areas in which you can infinitely restock the lowest grade of film. Over two months of playing this game, you will have to forgive me, my memory is not what it use to be. Maybe somewhere down the line I will revisit this single player, survival horror. Fatal Frame, barring the ending being absolute crap [and I refuse to find out if it is], is an amazing story.

The music and ambient sound are a triumph. After doing a little research, I realized that Tecmo used a new sound technology known as ARNIS. A first in video games, ARNIS simulates 5.1 surround sound. There is a moment when a ghost whispers in your ear and it sounds as if the ghost is whispering into your right ear.

The film grain and small touches to detail in many rooms you explore show age in today’s “era of 1080p shinyness”, but an age that is still well refined. The developers of Fatal Frame designed this game at the beginning of Playstation 2’s life. They were still getting use to the technology which [I’m assuming] improved over the next two sequels to the series. There are creaking wooden floors, wind gust which you could easily mistake for a moan and my personal favorite, black and white cut-scenes that have a film quality.

Sometimes me and my girlfriend would sit and she would watch me play while clutching to my arm. The game doubles as a movie and a decent horror novel. I highly recommend it for the patient, Playstation 2 collector as well as avid horror novel readers. The game is still worth almost as much as when it was initially released. There were limited copies printed and it would be a shame for this to escape the hands of survival horror fans.

I Give Fatal Frame…