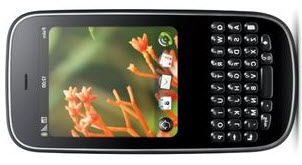 Palm and Sprint said today that the Palm Pixi cell phone will be available on Nov. 15 for $99.99.

The Palm Pixi phone is the second major smartphone from Palm this year. In June, Palm launched the $199 Palm Pre on Sprint’s phone network. The goal is to get an affordable smartphone out for the holidays.

Like the Pre, the Pixi uses Palm’s new WebOS operating system, which was designed for the hybrid web/voice usage of today’s smartphones. The $99.99 price, after a $50 instant rebate and $100 mail-in rebate, is contingent on the user signing up for a two-year service agreement with Sprint. The phone will be available at Sprint stores, the Sprint web site, and at stores such as Best Buy, RadioShack and Wal-Mart.

The phone has a multitouch screen and a QWERTY keyboard. It’s also a lot thinner than the Palm Pre and has a bunch of convenient web and social networking features, including a new Facebook app that lets users see and comment on the latest status updates from their friends. Users can buy a wireless Touchstone inductive charging system for $79.99. That means you can set it on a dock and it will charge.