The deal is the second largest privately funded IT investment so far this quarter, according to Dow Jones VentureSource.

Varicent has been around since 2003. This is the company’s C round of investment. The first round was led by Edgestone, the second by RBC, for a total of $15M in prior investment. 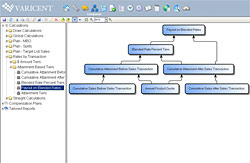 Varicent’s software is aimed at making it easy for businesses to model new business plans and track sales plans with bonuses and other variable compensation. According to Gartner, 93 percent of companies still use some sort of home-grown system to track sales plans. Besides the IT costs, it wastes salespeople’s energy re-learning systems from job to job. Companies like Varicent and competitor Callidus aim to replace in-house software with more powerful, more standardized and yet also more flexible tools.