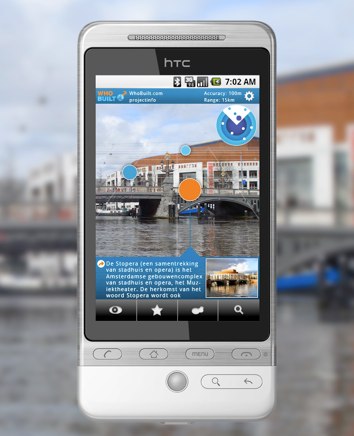 Layar, which has forged early leadership in the nascent but inspiring field of “augmented reality,” is about to finish raising a round of more than $1 million.

The Dutch company, which superimposes images and other data on top of a mobile phone browser, so that you can see things like how much a house costs simply by pointing your phone camera at it, will also distribute its technology on Symbian-Nokia phones, it announced today. Nokia phones, most of which use the Symbian operating system, have the largest market share worldwide, even if they’re not as popular in the U.S. market as they are abroad.

Raimo van der Klein, chief executive of Layar, spoke during the Symbian conference SEE in London on a panel about augmented reality, which I moderated. In comments afterward, he said the company has been overrun by investors, with 35 offers to date. The total round will be more than $1 million, and there’s a sliver of room left in the round, he said. He did not disclose the investors, but said they were all European.

Much of the panel was futuristic, focused on all the cool stuff that you can overlay within the browser, including your own thought processes. I tried to pull the panelists back to reality, and asked whether any real money is being made yet.

Right now, the field is so early that Layar has spent most of its time building out its platform to allow different developers to serve it with data, but hasn’t focused much on making money itself. Already, more than 800 developers are working on the platform. For example, Layer lets a real estate company offer price listing markers over a map on its browser, which right now is based on Google Maps. The real estate company can boast that it has wider distribution, and can reach more customers. Developers of other applications can make money by building third-party apps. So for example, a developer could build a channel “layer” for say, the beer company Heineken, and charge Heineken from $10,000 to $20,000 for the effort. A user of Layar could then select the Heineken channel from among Layar’s menu of options, and find out where Heineken is sold. Right now, Layar is based entirely on these layers, or channels.

Notably, there is no “commons,” or neutral area where a developer doesn’t control the channel. So if you use Layer, you’re only doing one thing, and the developer owns the experience. You’re a tourist, looking at the tourist layer, or you’re a Heiniken drinker looking for beer, etc. However, van der Klein said he’s studying a way to create an experience where brands can reach out across layers, so that Heiniken can serve ads whether a user happens to be. He wouldn’t disclose details.

Layar has already distributed on Android, and more recently on the iPhone. Van der Klein said he is most enthusiastic about Android, because the Google mobile operating system is distributed across different manufacturers and carriers each willing to strike individual deals with Layar. For example, he’s working with Motorola, LP, Sony Ericsson individually about how to build in the next release of Layar. They can help profile the app by putting it on a page of recommended applications. He said the Android team returns his emails within ten minutes and is incredibly hard working. With the iPhone, “it’s a black hole.” he said.”You throw it into the market and see what happens, there’s no ability to do deals.” Also, Apple in July acquired Placebase in, a mapping company some believe Apple wants to use to build out its own augmented reality platform.

Right now, Layar works simply — it relies on a phone’s GPS, a compass and accelerometer. That way, it knows where you are, because it knows here your phone is. And by accessing the phone’s compass, and accelerometer, it can triangulate exactly what you are pointing your phone at. The application developer can then funnel data to Layer’s system (a price of a home, a name of a restaurant, etc) so that the user gets more information about that place.

However, van der Klein acknowledged that more sophisticated technology, including sensor technology, is needed to provide things like indoor positioning where GPS can break down. Big players, from IBM to Nokia, are working to create better sensors and tighter integration of sensors, but it could take time. Symbian, for example, is building its own platform that could replicate much of what Layar does, but that could take at a year before it is off the ground. For now, Symbian’s Julien Fourgeaud, who was on the panel, said that he’s working to help Layar and doesn’t plan to cannibalize it.

Surprisingly, Layar’s van der Klein said that moving to Nokia-Symbian was one of the toughest decsions his company has yet to make. There are still questions about whether Nokia users are accessing applications to the extent they are on other smart phones. Android and the iPhone are like two full-speed trains, he said, while Symbian’s train is still stalled “in a gutter.” It will be March before Layar is actually launched on Nokia-Symbian, he said.

He does want to ensure distribution across all platforms, however the other major players — BlackBerry-maker RIM and Microsoft — don’t yet support the basic technology needed. RIM, for example, doesn’t even support a compass technology. He’s watching Microsoft.

We wrote about most of the other major augmented reality companies here.