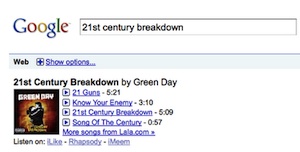 Google just officially announced the music search service that was first reported last week, where it’s teaming up with a number of music services to help you find the songs you’re looking for straight from Google search.

Basically, when you enter any music-related queries into Google, it will now show you results from Lala and MySpace (in the latter case using technology from iLike, which MySpace recently acquired). You can enter the name of an artist, song, album, or even a few lyrics, and the top results will be links that take you straight to the songs Google thinks you’re looking for. Google will also link to related songs hosted by music services imeem, Pandora, and Rhapsody.

By bringing in results from all these different services, Google becomes an obvious first stop for any music search. At the same time, it avoids the hassle of making licensing deals with the different record companies, since the songs are hosted elsewhere.

And of course all of these companies will probably get a nice traffic boost from Google. Indeed, any music startup that doesn’t get in on the Google deal is going to be at a huge disadvantage moving forward. So the next challenge for those music services is to figure out the best way to make money from all that new traffic …