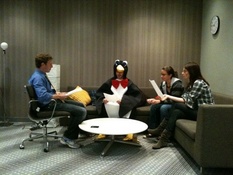 OK, who dressed as Mark Zuckerberg for Halloween? Click it for full size. That’s the real Zuckerberg at left in this photo being sent around the Internets, taking an important meeting at Facebook with an employee whose passion for Linux led him to dress as Tux the penguin on the day before Halloween.

But no worries about the costume. It’s 100% certain that any lonely male readers will take one look at this photo and see only: Girls!

Sony posted its fourth consecutive loss, but consumer electronics in general is turning around — Sony lost $289 million last quarter, compared to almost the same amount in profits last year. The company has already eliminated 16,000 jobs and closed eight factories, but the deep cuts weren’t enough. It reminded me ironically of the company’s 2005 “Welcome Change” campaign, pictured here. To welcome change, you need to get in there and love those layoffs. 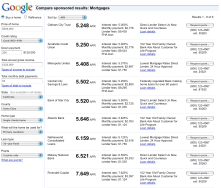 Google introduces AdWords Comparison Ads — It looks like Google is trying to steal Reply.com’s business by letting users of its search engine qualify themselves to realtors and car sellers right in the middle of an ad. Google is currently testing Comparison Advertising in a few U.S. states with a limited set of mortgage and refinancing advertisers.

Reply says these sort of self-qualifying ads can fetch one, three, even five dollars apiece, as opposed to the pennies that most AdSense text banners sell for. Inserting yourself between advertisers and Google is a popular startup model, because there’s money to be wrung from qualified campaigns where potential buyers for homes, cars, insurance, etc gladly provide info about their location and budget to interactive ad banners.

Google also spotted removing buttons from homepage — They’re always testing stuff over there, which would explain the brief appearance today of a Google page with no “I’m Feeling Lucky” button. Valleywag editor Ryan Tate was offended by the “Press enter to search” text that appeared in place of the buttons. He felt Google should know he knows that. But I’ll bet the “I’m Feeling Lucky” button confused users outside of goofy Silicon Valley. I’m also curious whether or not the Search button is considered expendable in VP of Actually Making Money Marissa Mayer’s ruthless regime of stripping down pages to load faster, which gives Google more traffic and bigger market share.