This page is filled with my Halloween Video Game Themed Pumpkins from 1998-2003, and is a follow up to this article:
http://www.bitmob.com/index.php/mobfeed/bitmobs-halloween-2009-videogame-pumpkin-carving-challenge.html#comments
That page holds my 2004-2008 editions.  Later today I will upload my 2009 piece.

Here’s Mario holding a shell from Super Mario Advance 4.  Not pictured too well, but somewhat visible on the back, is the title of the game.  Oh and yes, I am a black belt. 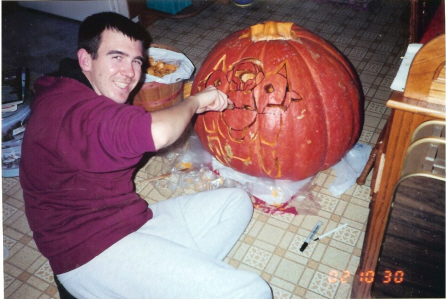 Here’s a picture of me carving out Samus Aran from Metroid Prime.

This was a little plug for EGM, to help advertise.  Watch EM on CNN, Thursday nights at 4:15PM!  It was on one of the sides of the pumpkin.

With such a big pumpkin, why not advertise when the game comes out on one of its other sides?  Metroid Prime drops 11-18-02.

First of all, that’s Mewtwo from Pokemon and me.  Secondly, it took some balls for me to put this picture online, so not a word, lol.

Yup, here’s the pumpkin that started my annual videogame pumpkin carving tradition.  Now, like the picture from above, it took a lot of guts to put this one up, lol.  I’m proud of my work though, because I was only 13, here.  :)