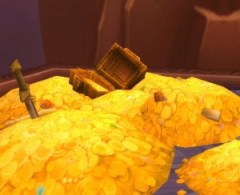 Scarcity — it’s the first concept drilled into any beginning economics major. And economics is about the production, distribution and consumption of scarce resources.

But in virtual economies, one could give a farmer unlimited grain and cows. So given that very key difference, if you’re the creator and overlord of a fully-fledged virtual world, how do you go about managing it (economically speaking)?

That was the topic of a talk by Live Gamer chief technology officer Bill Grosso at The Virtual Goods Summit this week. I’ve embedded the presentation below. It offered basic insights into how game designers create environments where people are prone to spend more (not unlike how grocery store chains manipulate floor layouts to compel customers to make impulse purchases).

1) In the real world, there are multiplier effects — for example, if the government lowers tax rates, that means there’s not only more money in the hands of taxpayers. Consumers may also go out and spend that extra income, pumping capital into other businesses, which means the economy could grow more than if you just accounted for the initial tax cut.

But in a virtual economy, there are “sources” and “sinks,” Grosso says. In a virtual world, there are constantly new sources of virtual cash, like discovering a virtual treasure chest or the base amount of income you get when you join a game. To maintain a stable economy, game creators have to come up with “sinks” or ways of removing currency from circulation.

2) In virtual worlds, you have absolute control. You can control what people can buy and when they can buy it.

3) You have perfect information. You know about all transactions at all times. This is different from the real world, where economists try and approximate growth and unemployment.

4) Price testing is nearly frictionless. You can bucket test prices for items with different users. (This would be much more costly in the real world. Imagine if Wal-Mart tried to offer one-half of its customers one price and the other half a different price. Or even if they tried to change the price for a week to see what would happen. They’d have to go in and physically relabel everything.) In a virtual economy, you can do it instantaneously and you can randomize it.

And here’s an extra one …. 5) You can dynamically adjust prices based on real-time demand. (OK, you can do that in the real-world too with commodities, equities and so on — but it’s more difficult for tangible goods like ice cream.)

So what do you do with all these differences? You may have to artificially create scarcity, Grosso says.