Editor’s note: Tommy describes the chaotic experience of attending a rock show by The Protomen — a band that draws inspiration from the life of Mega Man. Be sure to check out the sweet music video after the break! -Brett 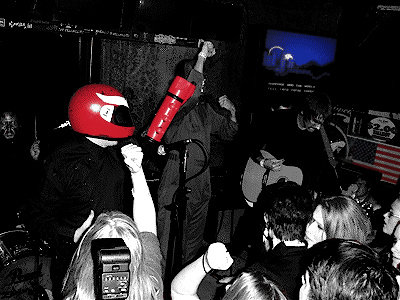 There’s a little dive bar in the town where I live that sometimes puts on rock shows. They usually fall into two categories: the local guy with a guitar whose friends are in attendance, or the punk rock band with no PA.

So when I paid my two dollar cover the other night to see some band called The Protomen, I was completely unprepared for the robot hell that soon broke loose.

The best name I can think of to define what the music sounded like is “dystopian nightmare robot rock.” This band took the negligible plot of the beloved Mega Man series and turned it into a friggin’ rock opera — complete with set pieces and acts.

The story of The Protomen goes something like this: The world has fallen, Wily’s robots have enslaved all of humanity, and Dr. Light’s first robot protector, Protoman, is presumed dead. Devastated by the loss of humanity’s savior, Light goes to work once more to create a new protector, one powerful enough to defeat all of Wily’s robots: a mega man.
Ladies and gentlemobbers, read on to witness the full insanity of The Protomen!