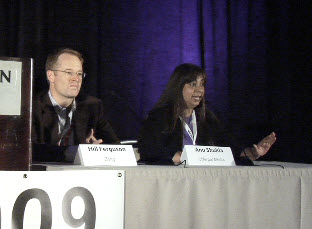 TechCrunch editor Michael Arrington and Offerpal Media chief executive Anu Shukla got into a brouhaha over special offers, which are used to monetize social apps on social networks, at the close of the Virtual Goods Summit on Friday.

At the close of a panel where Shukla spoke, Arrington asked how Shukla could defend her business of making offers that were leading the social game industry “into hell.” It just went downhill from there.

Shukla responded with a long answer about why Arrington’s commentary was “shit, double shit and bullshit.” You can see Alexa Lee’s video on the whole 10-minute exchange below. I also interviewed Shukla about the issue before the panel. 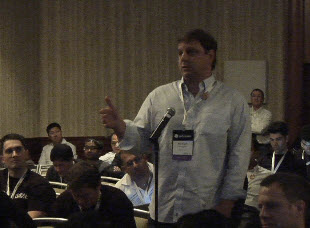 The debate revolves around whether specials offers are unethical and a bad experience for both users and advertisers. Shukla defended the practice of monetizing games and other social apps through offers, that let users pay with their time, participation and attention, rather than actual money.

Users can play games from the likes of Zynga and Playdom for free. But when they want to buy something in the games, such as a better plow to farm the land in Zynga’s FarmVille game, they have to pay. As an alternative to shelling out cash, they can accept an offer from Offerpal, which gets the user to do something like fill out a survey or subscribe to Netflix.

Arrington alleged these offers are so much trash. The offers are “slimy,” and users scam the advertisers by making up answers in surveys or signing up for services they plan to cancel. Arrington said this means that advertisers like Netflix aren’t getting their money’s worth from the ads, but Facebook and others involved aren’t putting a stop to the practice because they all make money from it.

Shukla contended that those objections are “shit” because most of the offers are high-quality and are filtered. She said, as we wrote earlier, that more than 160 million consumers have participated in Offerpal’s offers over the past two years. The total reach of the whole offer industry is still small, with only 5 percent to 30 percent of all gamers participating in offers.

The vast majority of offers are working out well, because the advertisers keep coming back. Most of the business is on Facebook, though it moved to Open Social-based networks for a time and has now returned to Facebook, thanks to that network’s rapid growth to more than 300 million users.

“We see more users turning to offers as a way to pay,” Shukla said in our interview.

Shukla acknowledged there were some offers in the general industry that were “spoiling the experience.” That’s why Facebook issued new policies in July that put restrictions on the offer business, particularly on offers that had to do with the mobile phone business. Shukla said Offerpal spent a lot of time cleaning out marginal offers and had to take a revenue hit as well. All of the social app companies are taking a hit as a result. Shukla said that was good for the industry, since some offer companies were letting bad offers creep in to gain market share.

“Unfortunately, some of the offers that were considered poor quality actually perform well,” she said. “If we took them out, and our competitors didn’t, they would perform better than us. So I love the fact that Facebook forced everyone to take them out.”

Even so, Shukla struck back hard at Arrington, who promised to expose bad practices. Arrington’s take on the event is here, while Offerpal has posted its own views on its blog. Video and pictures by Alexa Lee.