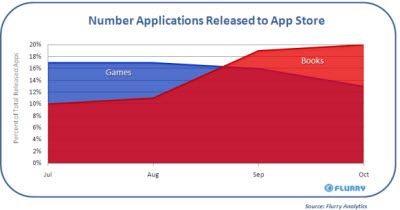 Games have been the No. 1 app on Apple’s iPhone for a while. That was true every month from August 2008 to August 2009. But in September and October, books surpassed games as the No. 1 category of new apps released, according to analytics firm Flurry.

The chart shows how books have surged in the past four months and how new book releases exceeded new game releases in September.

In October, one out of every five new apps launching in the iPhone has been a book. Book publishers from Your Mobile Apps to Softbank are adapting books for sale in the AppStore at record rates. Flurry believes that Apple is poised to take market share from the Amazon Kindle in eBooks, in spite of the iPhone’s smaller four-inch display compared to the Kindle’s six-inch display. If Apple is actually working on a larger tablet, as rumored, it could steal even more market share. 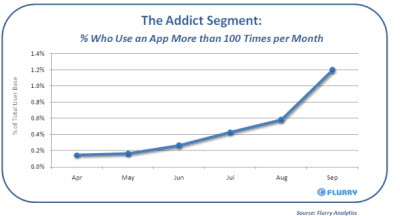