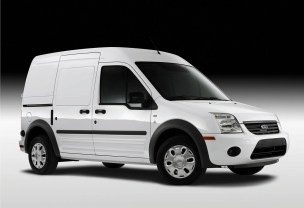 The Ford Motor Company has been the leading maker of work vehicles since dirt was young. While known for its F-150, its vans have long been popular with contractors, plumbers and delivery services. And come next year, they’ll have another, greener option: The 2010 Transit Connect BEV.

With a drive train made by Azure Dynamics and lithium-ion batteries from Johnson Controls-Saft, Ford’s all-electric van will travel 80 miles on one charge. Ford is already marketing the model to companies with large vehicle fleets. It is expected to save between $12 and $15 in gas per vehicle per day, not to mention hundreds of dollars a year in associated costs of internal combustion like oil, coolant and maintenance.

Azure Dynamics was just brought in to replace Smith Electric Vehicles, which says it wanted to focus more on medium duty trucks and a proposed postal vehicle. While it seems like the partnership between Smith and Ford was abruptly dissolved, the two companies insist that it was a mutual parting of the ways.

As for Johnson Controls-Saft, it is relatively new to EV battery making, though they have worked on hybrid systems combining Ni-MH batteries for more than 15 years. European bus systems have long been using their industrial-scale hybrid designs.

It also has impressive traction in the automotive industry in general. European bus systems have been using their hybrid products for a while now. Optima Batteries, a Johnson Controls subsidiary, has been recognized as the gold standard of car batteries. Not only that, they create batteries at a lower cost.

With traditional transportation fuels becoming more and more expensive over the next ten years, the introduction of an all-electric work vehicle is very timely. If Ford is able to offer its Transit Connect — to be manufactured in Kansas City, Mo. — for a competitive price, they might have to rethink their initial low-volume strategy and start churning them out to keep up with demand.