Silicon Valley has the rarest of things today: a silicon company with a new infusion of funding. Chip maker Maxim Integrated Products is spinning out one of its engineering teams into the chip startup Intelleflex in return for an equity stake. On top of that, Intelleflex has raised $8 million from New Venture Partners to make tiny radio chips.

Intelleflex is making radio frequency identification (RFID) chips, the tiny tags that aim to replace bar codes as product identifiers. These new RFID chips are more sophisticated than previous types and can be used to identify and track all sorts of things, such as a fleet of trucks. Older generations had relatively short ranges and were easy to compromise, while these new versions are more secure, have more storage capacity, and have a longer radio range. Intelleflex says its new RFID chips will be used to identify parts on Boeing’s new 787 Dreamliner. And drugstore chain Walgreens is testing 50,000 tags in its stores and supply chain.

The transaction is kind of a complex deal. Maxim, a Silicon Valley chip maker with $1.6 billion in revenues expected in 2009, was working on something similar to Intelleflex. Now the two companies will combine their engineering teams in order to accelerate a product launch. Seven Maxim engineers will join Intelleflex, and the so-called “extended capability” RFID chips are expected to launch in 2010.

Maxim will retain an equity stake in the startup. Maxim and Intelleflex plan to partner in sales and marketing efforts in the future. 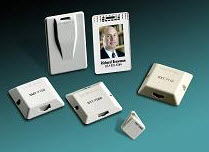 Intelleflex itself has had a long history. It was founded in 2003 to focus on amorphous silicon, or plastic chips. But it moved to RFID when its initial technology did not work out. The original founders left in 2006, while Richard Bravman joined as chief executive in 2005. Peter Mehrin became CEO in July, while Bravman became executive chairman. Now Intelleflex has 35 employees.